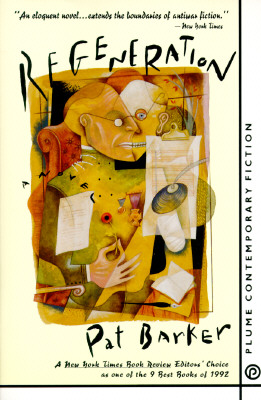 In 1917 Siegfried Sasson, noted poet and decorated war hero, publicly refused to continue serving as a British officer in World War I. His reason: the war was a senseless slaughter. He was officially classified "mentally unsound" and sent to Craiglockhart War Hospital. There a brilliant psychiatrist, Dr. William Rivers, set about restoring Sassoon's "sanity" and sending him back to the trenches. This novel tells what happened as only a novel can. It is a war saga in which not a shot is fired. It is a story of a battle for a man's mind in which only the reader can decide who is the victor, who the vanquished, and who the victim.

One of the most amazing feats of fiction of our time, Regneration has been hailed by critics across the globe.  As August 2014 marks the 100-year anniversary of World War I, this book is as timely and relevant as ever.

PAT BARKER has earned a place in the first rank of contemporary British writers with such novels as "Union Street," "Regeneration" (shortlisted for Britain's prestigious Booker Prize and chosen by the "New York Times" as one of the four best novels of 1992), "The Eye in the Door" (winner of the 1993 Guardian fiction prize), and "The Ghost Road" (winner of the 1995 Booker Prize). The latter three novels are available in Dutton hardcover and Plume paperback editions. Pat Barker lives in Durham, England.
Loading...
or
Not Currently Available for Direct Purchase