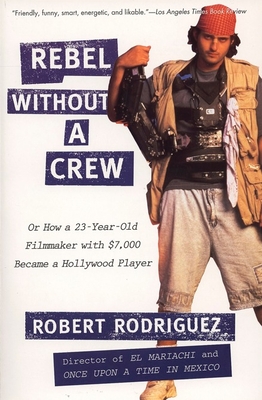 Rebel without a Crew

Or How a 23-Year-Old Filmmaker With $7,000 Became a Hollywood Player

Famed independent screenwriter and director Robert Rodriguez (Sin City, Once Upon a Time in Mexico, Spy Kids, Machete) discloses all the unique strategies and original techniques he used to make his remarkable debut film El Mariachi on a shoestring budget.

This is both one man's remarkable story and an essential guide for anyone who has a celluloid story to tell and the dreams and determination to see it through. Part production diary, part how-to manual, Rodriguez unveils how he was able to make his influential first film on only a $7,000 budget. Also included is the appendix, "The Ten Minute Film Course,” a tell-all on how to save thousands of dollars on film school and teach yourself the ropes of film production, directing, and screenwriting.

A perfect gift for the aspiring filmmaker.

Praise For Rebel without a Crew: Or How a 23-Year-Old Filmmaker With $7,000 Became a Hollywood Player…

“Robert Rodriguez won critical acclaim and the attention of every studio in Tinseltown with his action-packed debut feature, El Mariachi—but the question remains: However did he write, direct, shoot, and edit the flick all by his lonesome…and for a paltry $7,000? You’ll find that out and more in this straight-talking and highly entertaining memoir-cum-moviemaking primer... you will never view an independently made movie (or $7,000) the same way again.”—Entertainment Weekly

“There's no one in the American film business quite like Robert Rodriguez, who plays completely outside the rules imposed by Hollywood studios… Given his success rate, it's clear his method works… Rodriguez has long been a hero to independent filmmakers.”—The Daily Telegraph

"A hero to the independent film crowd."—The New York Times

“Only someone very young or ignorant would attempt to make a feature film with $7,000 dollars and no crew. This is because most people know such an endeavor is impossible. Not only did Robert Rodriguez create ‘El Mariachi’ under those conditions but at 23 he became a Hollywood success overnight… Rebel Without a Crew is the kind of book one would expect from someone who had the courage to break with convention and enough talent for it to pay off almost immediately.”—The Los Angeles Times

ROBERT RODRIGUEZ is an independent screenwriter and director of more than fifteen feature films. He pioneered the “Mariachi-style” and “one-man film crew” styles of filmmaking, and is the founder of the production company, Troublemaker Studios. Some of Rodriguez’s films include Sin City, Desperado, Once Upon a Time in Mexico, The Faculty, Sharkboy and Lavagirl, Spy Kids, Planet Terror, and Machete. He has collaborated with Quentin Tarantino on From Dusk Till Dawn and Grindhouse.
or support indie stores by buying on
(This book is on backorder)