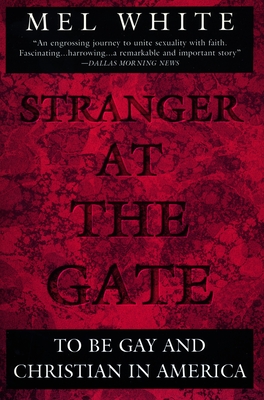 Stranger at the Gate

To Be Gay and Christian in America

"Compelling… eloquent and compassionate… We learn as much about growing up in the Christian right as we do about gay life in Mel White’s heartfelt and revealing memoir."—San Francisco Examiner

Until Christmas Eve 1991, Mel White was regarded by the leaders of the religious right as one of their most talented and productive supporters. He penned the speeches of Ollie North. He was a ghostwriter for Jerry Falwell, worked with Jim Bakker, flew in Pat Robertson's private jet, walked sandy beaches with Billy Graham. What these men didn't know was that Mel White—evangelical minister, committed Christian, family man—was gay.

In this remarkable book, Mel White details his twenty-five years of being counseled, exorcised, electric-shocked, prayed for, and nearly driven to suicide because his church said homosexuality was wrong. But his salvation—to be openly gay and Christian—is more than a unique coming-out story. It is a chilling exposé that goes right into the secret meetings and hidden agendas of the religious right. Told by an eyewitness and sure to anger those Mel White once knew best, Stranger at the Gate is a warning about where the politics of hate may lead America… a brave book by a good man whose words can make us richer in spirit and much wiser too.


Praise For Stranger at the Gate: To Be Gay and Christian in America…

"A courageous and important book … a clarion call for justice and freedom."—Malcolm Boyd, Episcopal priest, author of Take Off the Mask

"[Mel White is] perhaps the finest writer I know … a man of integrity and fairness."—Jerry Falwell, to Daniel Cattau of the Dallas Morning News

"Compelling …eloquent and compassionate … We learn as much about growing up in the Christian right as we do about gay life in Mel White's heartfelt and revealing memoir."—San Francisco Examiner

“The account of a deeply religious man’s coming to terms with his gayness and the impact that process had on his life. A former ghostwriter for Jerry Falwell, Pat Robertson, Billy Graham, and other religious-right personalities, White offers a compelling story; gay readers raised in a fundamentalist Christian environment will find themselves saying, ‘That happened to me.’”—Library Journal

“There are plenty of clergymen’s coming-out stories (most by Anglican priests) and plenty of gay replies to Jerry Falwell, Pat Robertson, and other antigay Christian evangelists, but on both counts, this is the one everybody’s been waiting for.”—Booklist

Mel White is a writer, filmmaker, and former ghostwriter of books, authobiographies, and speeches for Billy Graham, Jerry Falwell, Pat Robertson, Jim Bakker, and Oliver North. He is the author of such inspirational bestsellers as In the Presence of Mine Enemies and Tested by Fire. Dr. White serves as the National Minister of Justice for the Universal Fellowship of Metropolitan Community Churches from his position as Dean of Dallas's Cathedral of Hope (M.C.C.), the largest gay and lesbian church in the world. He lives with his husband, Gary Nixon, in Dallas, Texas.
Loading...
or
Not Currently Available for Direct Purchase