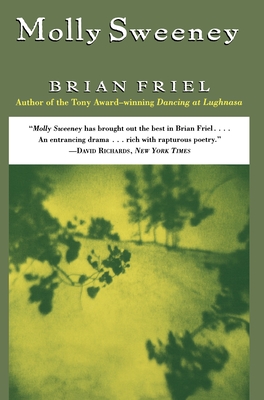 From one of Ireland’s best living playwrights, this striking piece of dramatic writing is a daring piece of theater. Keeping the play’s three characters on stage at all times to speak directly to the audience, Brian Friel presents three points of view to the same intriguing tale. Molly herself, blind since she was an infant, tells of her world before and after an operation to try to restore her sight. Her husband, itinerant champion of good causes, talks of his passion to help her. Her once famous eye surgeon, now a whiskey-sodden recluse in Donegal, sees the operation as his chance to reclaim his reputation. Each of their voices interweaves, threading in and out with details, spinning a lush and sensate narrative, and carrying us effortlessly to an unexpected and poignant conclusion.

Deceptively simple, yet richly multilayered—combining both an insightful story about the way we perceive our existence with an allegory for our times—Molly Sweeney is an Irish storyteller’s art to create an unforgettable theater piece, painting scenery and rousing emotions with nothing more than the simple purity of beautifully rendered words.

One of Ireland's foremost playwrights, Brian Friel has written more than twenty plays since his debut in 1965, most notably the Tony Award-winning Dancing at Lughnasa and Molly Sweeney (available in a Plume edition). Friel has been a member of the Irish Academy of Letters since 1983 and has received awards from the National University of Ireland and Queen's University in Belfast. He lives in Donegal with his wife and five children.
Loading...
or
Not Currently Available for Direct Purchase