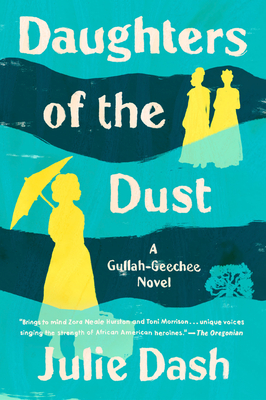 Daughters of the Dust

Drawing from the magical world of her iconic Sundance award-winning film, Julie Dash’s stand-alone novel tells another rich, historical tale of the Gullah-Geechee people: a multigenerational story about a Brooklyn College anthropology student who finds an unexpected homecoming when she heads to the South Carolina Sea Islands to study her ancestors.

Set in the 1920s in the Sea Islands off the Carolina coast where the Gullah-Geechee people have preserved much of their African heritage and language, Daughters of the Dust chronicles the lives of the Peazants, a large, proud family who trace their origins to the Ibo, who were enslaved and brought to the islands more than one hundred years earlier.

Native New Yorker and anthropology student Amelia Peazant has always known about her grandmother and mother’s homeland of Dawtuh Island, though she’s never understood why her family remains there, cut off from modern society. But when an opportunity arises for Amelia to head to the island to study her ancestry for her thesis, she is surprised by what she discovers. From her multigenerational clan she gathers colorful stories, learning about "the first man and woman," the slaves who walked across the water back home to Africa, the ways men and women need each other, and the intermingling of African and Native American cultures. The more she learns, the more Amelia comes to treasure her family and their traditions, discovering an especially strong kinship with her fiercely independent cousin, Elizabeth. Eyes opened to an entirely new world, Amelia must decide what’s next for her and find her role in the powerful legacy of her people.

Daughters of the Dust is a vivid novel that blends folktales, history, and anthropology to tell a powerful and emotional story of homecoming, the reclamation of cultural heritage, and the enduring bonds of family.

Praise For Daughters of the Dust: A Novel…

Praise for the novel:

"A compelling portrait...told through the lyrical stories of its strong and complicated women."—Chicago Tribune

"Rich in the language and traditions of the Gullahs...a testimony to the strength of all women bonded through kinship and friendship."—Richmond Times-Dispatch

"Comes alive in the anecdotes told in the dialect of the many marvelously varied characters and in its descriptions of the overwhelming beauty of the Geechee language and the lushness of the land."—Washington Post Book World

"A portable feast, well spiced with colorful, delicious condiments from Africa and the Black South...Evokes humor and tragedy with an equally clear eye...a riveting family saga by a writer not afraid to use her imagination."—Norfolk Virginian-Pilot

"A touching story about self-preservation, a family's struggle to keep its culture intact, and a young woman's personal struggle to understand how her family's past has shaped her life and the lives of her mother and grandmother...about holding on, letting go, and going home."—Florida Times-Union

"With tremendous detail and historical information, Dash creates a world full of ritual and tradition of which the reader becomes an intimate part."—Emerge

"A heady tale of family and heritage."—Entertainment Weekly

"Daughters of the Dust is an epic tale steeped in the beauty of an Africa-infused American island and its divine women."—Vibe

"This heartwarming novel based on elemental human values shows Dash to be as fine a storyteller as she is a filmmaker."—Booklist

"Dazzles with the complex beauty of island culture...lyrical and layered."—Nashville Tennessean

"A lush and lyrical story...exploring a background rich in hardship, strength, passion, and joy."—Louisville Courier-Journal

"In her new novel, Dash reacquaints us with her marvelous characters and extends their tale in greater and even more compelling ways."—Macon Courier

Thirty years ago, filmmaker Julie Dash became the first African American woman to have a wide theatrical release of a feature film with her Sundance award-winning Daughters of the Dust. The world of the film was the basis for Dash’s eponymous debut novel. Her extensive résumé as a film/TV writer and director includes the award-winning drama series Queen Sugar (season 2), created and produced by Ava DuVernay and Oprah Winfrey for OWN Television, and the NAACP Image Award–winning The Rosa Parks Story, which was also nominated for Emmy and DGA awards. Today she has several documentary projects in the works and is a Distinguished Professor of Art and Visual Culture at Spelman College.
Loading...
or
Not Currently Available for Direct Purchase