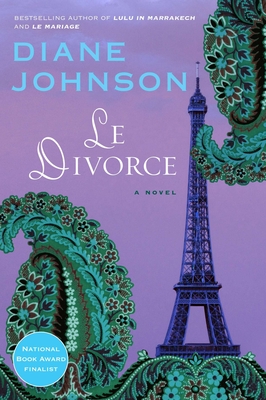 "If one were to cross Jane Austen and Henry James, the result would be Diane Johnson."—San Francisco Chronicle

The national bestseller and inspiration for the major motion picture starring Naomi Watts and Kate Hudson!

Called "stylish... refreshing... genuinely wise” by The New York Times Book Review,this delightful comedy of manners and morals, money, marriage, and murder follows smart, sexy, and impeccably dressed American Isabel Walker as she lands in Paris to visit her stepsister Roxy, a poet whose marriage to an aristocratic French painter has assured her a coveted place in Parisian society—until her husband leaves her for the wife of an American lawyer. Could "le divorce" be far behind? Can irrepressible Isabel keep her perspective (and her love life) intact as cultures and human passions collide?

"Social comedy at its best" (Los Angeles Times Book Review), Le Divorce is Diane Johnson at her most scintillating and sublime.

“A modern collision of French and American mores begins in near farce but ends in tragedy in Johnson's bright, unsparing novel… Johnson is especially good at catching the class-bound, cool, utter self- assurance of the French upper classes, and the determinedly frank, aggressive innocence of their American counterparts… A shrewd, carefully detailed portrait of the ways in which Americans and the French continue to romanticize, denigrate, and misapprehend each other, contained in a well-paced, believably dramatic narrative.”—Kirkus Reviews

"One savors each page… If one were to cross Jane Austen and Henry James, the result would be Diane Johnson."—San Francisco Chronicle