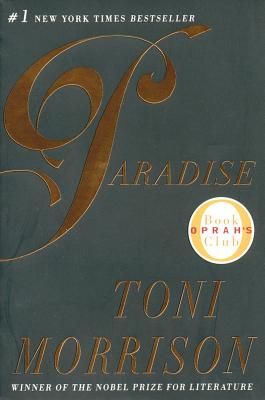 "They shoot the white girl first. With the others they can take their time." Toni Morrison's first novel since she was awarded the Nobel Prize for Literature opens with a horrifying scene of mob violence then chronicles its genesis in a small all-black town in rural Oklahoma. Founded by descendants of free slaves as intent on isolating themselves from the outside world as it once was on rejecting them, the patriarchal community of Ruby is built on righteousness, rigidly enforced moral law, and fear. But seventeen miles away, another group of exiles has gathered in a promised land of their own. And it is upon these women in flight from death and despair that nine male citizens of Ruby will lay their pain, their terror, and their murderous rage...

Paradise is a tour de force of storytelling power, richly imagined and elegantly composed. Morrison challenges our most fiercely held beliefs as she weaves folklore and history, memory and myth, into an unforgettable meditation on race, religion, gender, and the way a society can turn on itself until it is forced to explode.