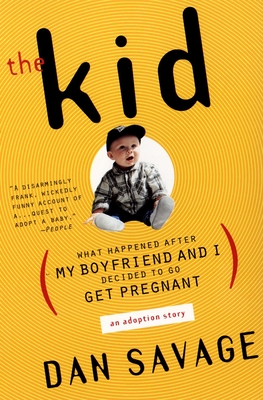 Dan Savage's nationally syndicated sex advice column, "Savage Love," enrages and excites more than four million people each week. In The Kid, Savage tells a no-holds-barred, high-energy story of an ordinary American couple who wants to have a baby. Except that in this case the couple happens to be Dan and his boyfriend. That fact, in the face of a society enormously uneasy with gay adoption, makes for an edgy, entertaining, and illuminating read. When Dan and his boyfriend are finally presented with an infant badly in need of parenting, they find themselves caught up in a drama that extends well beyond the confines of their immediate world. A story about confronting homophobia, falling in love, getting older, and getting a little bit smarter, The Kid is a book about the very human desire to have a family.

Dan Savage's column, "Savage Love," is a nationally syndicated sex-advice column read by more than four million people each week. He has written the column for eight years, and it runs in twenty-six newspapers in the United States and Canada. He also writes "Dear Dan," an online advice column for ABCNews.com. Savage is the associate editor of The Stranger in Seattle and a regular contributor to This American Life on NPR and is the author of Savage Love (Plume), a collection of his advice columns. He lives in Seattle, Washington.
Loading...
or support indie stores by buying on