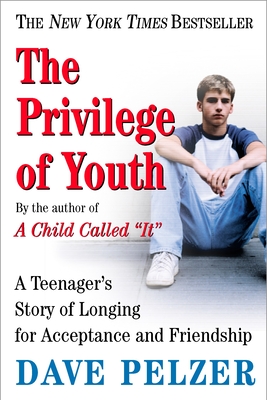 The Privilege of Youth

A Teenager's Story of Longing for Acceptance and Friendship

The #1 New York Times and #1 internationally bestselling author who is a shining example of what overcoming adversity really means now shares the lost chapter of his uplifting journey, which has touched the lives of millions.

From A Child Called “It” to The Lost Boy, from A Man Named Dave to Help Yourself, Dave Pelzer’s inspirational books have helped countless others triumph over hardship and misfortune. In The Privilege of Youth, he shares the missing chapter of his life: as a boy on the threshold of adulthood. With sensitivity and insight, he recounts the relentless taunting he endured from bullies; but he also describes the thrill of making his first real friends—some of whom he still shares close relationships with today. He writes about the simple pleasures of exploring his neighborhood, while trying to forget the hell waiting for him at home.

From high school to a world beyond the four walls that were his prison for so many years, The Privilege of Youth bravely and compassionately charts this crucial turning point in Dave Pelzer’s life and will inspire a whole new generation of readers.


Praise For The Privilege of Youth: A Teenager's Story of Longing for Acceptance and Friendship…

“A monumental series of books about courage and triumph. Pelzer demonstrates, as few have, that it is in the darkest skies that the stars are best seen.”—Richard Paul Evans, New York Times bestselling author of The Christmas Box

"Dave Pelzer is a living testament of resilience, personal responsibility, and the triumph of the human spirit."—John Bradshaw, #1 New York Times bestselling author of Homecoming and Family Secrets

"A living example that all of us have the capability to better ourselves no matter what the odds... Dave Pelzer inspires us all."—Jack Canfield, #1 New York Times bestselling coauthor of Chicken Soup for the Soul

Dave Pelzer is the #1 New York Times bestselling author of A Child Called “It", The Lost Boy, A Man Named Dave, Help Yourself, and The Privilege of Youth. He travels more than 250 days a year throughout the nation speaking to large groups of youth and adults on the topics of resilience and overcoming obstacles. He has appeared on the Oprah Winfrey Show, Larry King Live, and The Montel Williams Show, among other national shows.
www.davepelzer.com
Loading...
or support indie stores by buying on