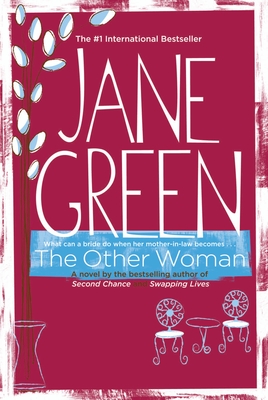 From the New York Times bestselling author of Falling and Sister Stardust comes a novel about marrying your dream man—and his mother.

When Ellie meets Dan, she thinks she’s found the perfect man, complete with a loving, close-knit family. Having lost her own mother young, Ellie looks forward to gaining the mother she never had. But first signs of trouble appear when their intimate civil wedding ceremony is transformed into a full-fledged black-tie affair, and Ellie starts to wonder if Dan’s boundary-hating mother, Linda, might be a little too involved.

As troubles between them mount, Ellie turns to her friends—glamorous Lisa and wonderful frazzled Trish—to help her recapture the independence she once had, and the man she still loves. But having her own child makes Ellie realize that the unconditional, sometimes overwhelming love of a mother is something that can’t—and shouldn’t—be ignored...

Praise For The Other Woman…

“A warm bath of a novel that draws you in...Green’s sympathetic portrayals—resonate.”—USA Today

A former journalist in the UK and a graduate of the International Culinary Center in New York, Jane Green has written many novels (including Jemima J, The Beach House, and, most recently, Falling), most of which have been New York Times bestsellers, and one cookbook, Good Taste. Her novels are published in more than twenty-five languages, and she has over ten million books in print worldwide. She lives in Westport, Connecticut, with her husband and a small army of children and animals.

The “other woman” in Ellie’s marriage is her mother-in-law, Linda, but there are many types of “other” women in her life as well. Discuss conflicts of loyalty in the novel in terms of family, marriage and friendship.

Use one relationship triangle (e.g., Lisa, Trish, and Ellie) to demonstrate how relationships evolve through the course of the book. Can you draw any parallels between this and your own life? Which character do you most identify with? Why?

Ellie initially idealizes Dan’s family as a substitute for her childhood experiences. How do her expectations of marriage and family affect her happiness? Did you ever have similar feelings?

How does Ellie’s identity shift as she moves from single woman to wife to mother? How does her choice of friends reflect these changes? What does she learn?

We see Ellie’s relationship with Linda through Ellie’s perspective. How do you think Linda would describe the events of the book? Were there moments when you sympathized with Linda instead of Ellie?

What is your opinion of Dan’s behavior toward the conflicts between his mother and his wife? Did your feelings for Dan’s father change from the beginning of the novel to the end?

Compare the portrayal of marriage and family in this novel with another book or film you have enjoyed recently. What similarities or differences do you notice in the depiction of the relationships? Is Dan and Ellie’s experience typical of marriage today?

There is a large cast of supporting characters in The Other Woman. Were there any that you wished played a more prominent role in the novel? If so, briefly describe how you would have included them in the plot. If not, explain which character you could have eliminated completely.

Take turns describing Ellie physically and psychologically. If the novel were a movie, whom would you cast in the starring roles?