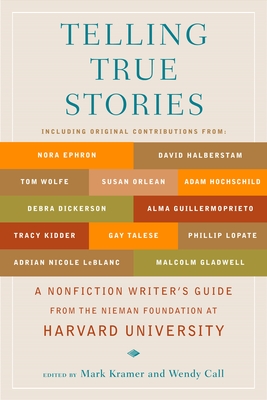 A Nonfiction Writers' Guide from the Nieman Foundation at Harvard University

Interested in journalism and creative writing and want to write a book? Read inspiring stories and practical advice from America’s most respected journalists.

The country’s most prominent journalists and nonfiction authors gather each year at Harvard’s Nieman Conference on Narrative Journalism. Telling True Stories presents their best advice—covering everything from finding a good topic, to structuring narrative stories, to writing and selling your first book. More than fifty well-known writers offer their most powerful tips, including:

• Tom Wolfe on the emotional core of the story
• Gay Talese on writing about private lives
• Malcolm Gladwell on the limits of profiles
• Nora Ephron on narrative writing and screenwriters
• Alma Guillermoprieto on telling the story and telling the truth
• Dozens of Pulitzer Prize–winning journalists from the Atlantic Monthly, New Yorker, New York Times, Los Angeles Times, Washington Post and more . . .

The essays contain important counsel for new and career journalists, as well as for freelance writers, radio producers, and memoirists. Packed with refreshingly candid and insightful recommendations, Telling True Stories will show anyone fascinated by the art of writing nonfiction how to bring people, scenes, and ideas to life on the page.


Praise For Telling True Stories: A Nonfiction Writers' Guide from the Nieman Foundation at Harvard University…

“Tantalizing essays… Ultimately this is a book about why stories matter and how journalists can and should master the craft of storytelling, whether they work in newspapers, magazines, books, radio, television, or film… [B]rims with wisdom on how to get to the emotional core of nonfiction stories. It contains useful advice on everything from how to get people to open up… to how to distill all the material you have gathered into a polished story that glues readers to the page… This is the kind of book that any aspiring storyteller can dip into and learn from, no matter what the stage of his or her career.”—Alison Bass, Harvard Review

“Tips spill from every chapter of the book… Every page—and I mean every page—contains important wisdom for every journalist. Telling True Stories is the relatively rare guide that offers value to veteran journalists, to novices, to investigative journalists and to beat reporters.—Steve Weinberg, The IRE Journal

“A virtuoso collection of essays by writers on writing non-fiction; these remarkable insights into the craft were collected at Harvard University and includes selections from such notable veteran scribes as Tom Wolfe, Tracy Kidder, Susan Orlean, David Halberstam, Nora Ephron and Malcolm Gladwell.”—The Seattle Post-Intelligencer

“Practical advice for writers on how to get published, write a memoir, and more.”—Boston Magazine

“Provides advice from 51 nonfiction writers, including notables Tom Wolfe, Gay Talese, and Nora Ephron… Writers coming to this book should not expect one clear-cut path for producing strong nonfiction; instead, the book provides pointed but wide-ranging advice on writing-a good illustration of the creativity behind nonfiction and the individuality of the writing process. There is enough variety for almost any nonfiction writer to find inspiration and guidance. Topics include interviewing techniques, storytelling, using tape recorders and notebooks, developing characters and scenes, and editing. The section titled ‘Building a Career in Magazines and Books’ will especially help new writers.”—Library Journal

Mark Kramer was writer-in-residence in the American Studies Program at Smith College (1980-1990), writer-in-residence and a professor of journalism at Boston University (1990-2001), and writer-in-residence and founding director of the Nieman Program on Narrative Journalism at Harvard University (2001-2007). He's written for the New York Times Magazine, National Geographic, The Atlantic Monthly, and many other periodicals. He's co-author of two leading textbook/readers on narrative nonfiction: Telling True Stories and Literary Journalism. He's written four additional books: Mother Walter and the Pig Tragedy, Three Farms, Invasive Procedures, and Travels with a Hungry Bear. He's currently at work on a book about writing narrative nonfiction. His website is www.tellingtruestories.com.

Wendy Call is author of No Word for Welcome: The Mexican Village Faces the Global Economy, winner of the 2011 Grub Street National Book Prize for Nonfiction. She co-edited Telling True Stories: A Nonfiction Writers' Guide. Wendy has served as Writer in Residence at 20 institutions, five national parks, four universities, a public hospital, and a historical archive. She writes and edits nonfiction, translates Mexican poetry and short fiction, and works as a teacher at Richard Hugo House and Goddard College. Before turning to full-time word-working in 2000, she devoted a decade to work for social change organizations in Boston and Seattle. The daughter of a middle-school math teacher and a career Navy officer from Michigan, Wendy grew up on and around military bases in Florida, Pennsylvania, southern California, and southern Maryland. She lives and works in Seattle.
Loading...
or support indie stores by buying on