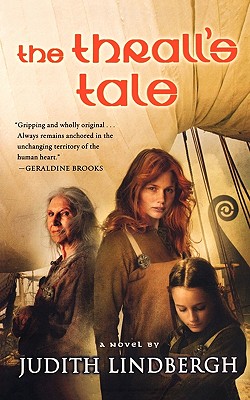 The Thrall's Tale is a masterpiece of historical fiction that follows Katla, a slave, her daughter Bibrau, and their mistress Thorbjorg, a prophetess of the Norse god Odin, as they navigate the stormy waters of love, revenge, faith, and deception in the Viking Age settlements of tenth-century Greenland. Lindbergh's lyrical prose captures the tenuousness of lives led on the edge of the known world, the pain of loyalties shattered by Christian conversion, and the deepest desires hidden in the human heart. A book that has appeal for readers of fantasy and romance as well as historical and literary fiction, The Thrall's Tale is an absorbing cultural saga researched and written over ten years as Lindbergh immersed herself in the literature, artifacts, and landscape of her characters' lives and world.

Lindbergh has come up with an extraordinarily original style in which to tell her story—an English that sounds archaic, almost Norse, and yet is perfectly accessible to the contemporary reader. Discuss the ways that she has accomplished this stylistic feat, paying attention to diction, the rhythm of her prose, and old-fashioned expressions.

Katla, the thrall of the title, is an extremely complex character—a strong woman who has been savagely damaged. She ends up being both angry and proud, a loving Christian who nonetheless hates her own daughter. Discuss the various strands of Katla’s character and your reactions to them.

At the end of the book, Lindbergh adds a note about her historical sources, primarily the Norse sagas. Take a look at these sagas, especially the Vinland Sagas, and examine their depictions of the characters of Eirik, Thorbjorg, and Torvard. Discuss how Lindbergh has embellished the sagas and how she has reimagined and transfigured her sources.

The novel is narrated by three intertwined women, and each presents a radically different point of view on the action. Discuss why Lindbergh has chosen this method of telling her story and what impact it has on your experience of reading the book. Which of the narrators did you like most? Which did you trust most?

The transition from paganism to Christianity is at the heart of the novel. Discuss how Lindbergh weaves the basic tenets of Christianity into her story. Do you see The Thrall’s Tale as primarily a Christian novel, a book that endorses the Christian faith? Or do you think Lindbergh also respects and values the enduring power of Norse pagan beliefs and practices?

Bibrau constantly refers to her “fylgie,” the spirit who keeps watch over her and goads her to evil deeds, harmful to others or to herself. What do you make of this fylgie? Do you see it as a figment of her own perverse imagination, an objectified aspect of her own psyche, a hallucination? Talk about the role of the spirit world in Norse mythology.

“We are all slaves,” says Thorbjorg, “all of us.” The theme of freedom versus enslavement runs throughout the book. Consider what it means to be a thrall in Norse society and how the coming of Christianity alters the position of slaves in this intensely hierarchical colony. In what sense does Thorbjorg’s comment apply even to free members of the community?

Women are at the center of The Thrall’s Tale but there are also some compelling male characters: Ossur, Torvard, Thorhall. Compare how Lindbergh draws and fleshes out male and female characters. Do you think she does a better job with one gender? Why do you think she has only women narrate the book?

Thorbjorg gets the last word: her lullaby to one-eyed Odin closes the book. Discuss the significance of this ending.