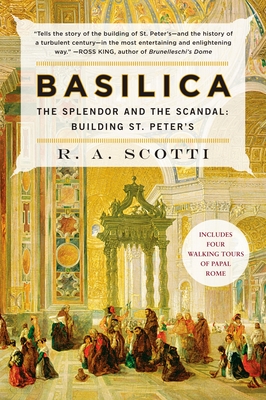 The Splendor and the Scandal: Building St. Peter's

In this dramatic journey through religious and artistic history, R. A. Scotti traces the defining event of a glorious epoch: the building of St. Peter's Basilica. Begun by the ferociously ambitious Pope Julius II in 1506, the endeavor would span two tumultuous centuries, challenge the greatest Renaissance masters—Michelangelo, Raphael, and Bramante—and enrage Martin Luther. By the time it was completed, Shakespeare had written all of his plays, the Mayflower had reached Plymouth—and Rome had risen with its astounding basilica to become Europe's holy metropolis. A dazzling portrait of human achievement and excess, Basilica is a triumph of historical writing.

Praise For Basilica: The Splendor and the Scandal: Building St. Peter's…

[Scotti] . . . appreciates the epic quest and querulousness and leaves us wondering how anything of any merit ever gets designed, built, consecrated and celebrated. (The Providence Journal-Bulletin)

R. A. Scotti is the author of two previous works of nonfiction, including Sudden Sea: The Great Hurricane of 1938, and four novels.

The outrage sparked by the demolition of Constantine’s basilica to make way for the new St. Peter’s brings to mind modern battles between real estate developers and defenders of historic landmarks. And yet today, the “new” basilica is itself a historic treasure—one of the architectural marvels of the late Renaissance. To what degree do you believe a city’s architectural legacy should be preserved? Where do we draw the line between preserving the past and embracing the future?

Before reading Basilica, how aware were you of Renaissance-era papal practices, such as the selling of indulgences and venal offices, or of the questionable moral character of the era’s popes? Does the Vatican’s checkered history affect your perception of the institution today?

Scotti writes, “Religion is illusion . . . and the gleam of gold, the clouds of incense, . . . the sacred art and evocative music, create that illusion. Stripped bare of all but its dogma, it would be exponentially reduced.” Do you agree?

Scotti details the vast sums spent on the basilica at a time when most Catholics lived in abject poverty. Does this allocation of resources seem morally justifiable?

Like many monumental structures of antiquity, St. Peter’s was built on a scale and with a level of craftsmanship that seems inconceivable today. Are there any architectural achievements of the last century that seem on par with the construction of St. Peter’s?

Today, the Sistine Chapel ceiling is regarded as one of Michelangelo’s greatest achievements. But he saw the commission as a punishment—a distraction from what he considered his most important work: sculpting the tomb of Julius. Do you think Julius’s redirection of Michelangelo’s talent brought the artist to greater heights? Is there an argument to be made that artists, in general, create better work under direction?

The book describes the many personal rivalries and animosities among the artists who worked on the basilica. Do you think the great artists of the Renaissance—or of any era—could have reached the same heights without this competitiveness?

Of the many historic figures in Basilica—from Julius II to Raphael to Martin Luther—who would you most like to meet? If you could put a question to any one of them, what would it be?