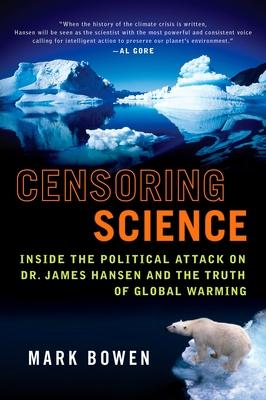 Dr. James Hansen and the Truth of Global Warming

The dramatic story of global warming, politics, and the scientist Al Gore calls “the most powerful and consistent voice calling for intelligent action to preserve our planet's environment.”

Censoring Science is the gripping story of the world's preeminent climatologist, Dr. James Hansen, the “pivotal character in the greatest and most politically charged science story of our time” (New Scientist). NASA's leading climate expert, Dr. Hansen first broke the international news on global warming at a Senate hearing in 1988. Little did he expect the rising storm of politically motivated resistance, denial, and obstruction.

Revealing the extent of the Bush administration's censorship of Dr. Hansen's findings, Censoring Science sets the record straight with solid scientific facts such as: the hottest years on record have occurred in the last two decades, and ice is melting at record rates all around the planet. Dr. Hansen shows how we can still prevent environmental disaster if the country and the government are willing to face the truth about global warming.

Praise For Censoring Science: Dr. James Hansen and the Truth of Global Warming…

"Eye-opening... A must-read not just for environmentalists but for all politically conscientious readers."—Kirkus (starred review)

“A meticulous account of how political appointees in the Bush administration worked to prevent scientists at the National Aeronautics and Space Administration from communicating their research on climate change to the public.”—The Providence Journal

“This portrait of NASA climate scientist James Hansen and his decades-long struggle to alert the public about global warming's perils and potential solutions ranges from deeply disturbing and frightening to inspiring. Disturbing, as Bowen (Thin Ice) gives convincing evidence that the Bush administration did its best to control NASA scientists' communication with the public in order to undermine belief in global warming and belittle its consequences. According to Bowen, the administration set up ideological political loyalists in positions formerly held by career professionals, gutted NASA's earth science budget, then denied these actions… Hansen's conviction that tools exist right now to mitigate the worst effect—if only we will use them—is surprisingly hopeful.”—Publishers Weekly

“In the end, I believe we should think of James Hansen as an exceedingly reluctant hero, and an uncomfortable one to boot—the Bilbo Baggins of climate politics. Here's a guy who really just wanted to get back to the hobbit hole of his research, but who was forced by the political situation in which he found himself—and the failures of others to step up and do the job—to march off and confront the dragon. But Hansen seized the moment and took the risk when many others did not, and for that he deserves to be celebrated.”—New Scientist

"One of the best books yet published on climate change . . . The best compact history of the science of global warming I have read."―Bill McKibben, The New York Review of Books

“Will appeal to mountaineering and climatology buffs, but should be read by everyone concerned about the future of our planet.”—Publishers Weekly

“In a smoothly flowing narrative, [Bowen] describes drilling ice at high altitudes and explains the science that points to a steady rise in global temperature as a result of human activities.”—Scientific American

“Readers will be intrigued by the author's exceptional narrative and—at the same time—will able to stay safe and warm.”—Booklist

“Amusing and entertaining . . . Thin Ice is at the same time a scientific biography, a fine introduction to the sciences of climate change and a vivid description of a geophysicist's work under most extreme conditions.”―Nature

MARK BOWEN, Ph.D., is the author of Thin Ice, which was praised as “one of the best books yet published on climate change” (New York Review of Books) and named the best science book of the year by NPR’s Living on Earth; and Censoring Science, which Kirkus called "a must-read not just for environmentalists but for all politically conscientious readers." He has a Ph.D. in physics.
Loading...
or
Not Currently Available for Direct Purchase