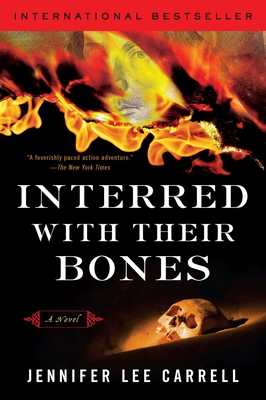 Interred with Their Bones

On the eve of the Globe’s production of Hamlet, Shakespeare scholar and theater director Kate Stanley’s eccentric mentor Rosalind Howard gives her a mysterious box, claiming to have made a groundbreaking discovery. Before she can reveal it to Kate, the Globe is burned to the ground and Roz is found dead—murdered in the strange manner of Hamlet’s father.

Inside the box, Kate finds the first piece in a Shakespearean puzzle, setting her on a deadly, high-stakes treasure hunt. From London to Harvard to the American West, Kate races to evade a killer and solve a tantalizing string of clues hidden in the words of Shakespeare, which may unlock one of history’s greatest secrets. But Kate is not alone in this hunt, and the buried truth threatens to come at the ultimate cost.

Praise For Interred with Their Bones…

Jennifer Lee Carrell holds a Ph.D. in English and American literature from Harvard University and is the author of The Speckled Monster: A Historical Tale of Battling Smallpox and the novel Interred with Their Bones. In addition to writing for Smithsonian magazine, Carrell has taught in the history and literature program at Harvard and has directed Shakespeare for Harvard’s Hyperion Theatre Company. She lives in Tucson, Arizona.

One of the pervading themes of Interred with Their Bones is the gap between the academic and the practical when it comes to the works of Shakespeare. The great gap between Roz Howard’s “ivory tower” approach to Shakespeare and Kate Stanley’s need to have the actual hands-on experience of directing a Shakespearean play provides the opening conflict of the novel. When it comes to classic theater, is studying the plays and the playwright enough? Is it important to experience Shakespeare’s works in the way the playwright intended, performed before a live audience?

In Chapter Two, Sir Henry makes the comment: “A secret is a kind of promise. It can also be a prison.” What does he mean by this? Is he trying to subconsciously give Kate a message about his own future actions?

One of the more fascinating characters of the novel isn’t a person at all; rather, it is a book, Shakespeare’s First Folio collection. How does the author use this book to lay the framework for the rest of the novel?

The title of the book comes from a quotation by Shakespeare: “The evil that men do lives after them; The good is oft interred with their bones.” How does this still hold true today? Why do we so often remember the names of criminals, but not the names of those who capture them?

Throughout the novel, a number of different theories emerge about the identities of possible alternate authors of Shakespeare’s work. If it was ever proven that Shakespeare did not actually write his own plays, would it lessen the importance of those plays?

Shakespeare’s lost play is the equivalent of the Holy Grail for Kate. She seems to place the utmost importance on discovering it over all else. Do you share, or understand, her feelings about the play? What kind of artifact would be your Holy Grail?

The killer recreates murder scenes from some of Shakespeare’s most famous plays. What is the significance of this and why?

In his own time, Shakespeare was considered lowbrow, an entertainer who pandered to the lower classes; time has since proven his critics wrong. Are there novelists and playwrights living today who may one day be considered the “new Shakespeare”?

One of the more fascinating details revealed in the book is Shakespeare’s unusual influence throughout the American West. Why do you think the pioneers and cowboys were drawn to Shakespeare? What purpose did Shakespeare’s works serve in their lives?