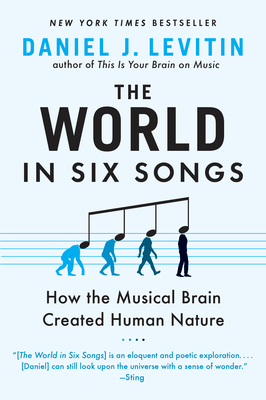 The World in Six Songs (Paperback)

The author of the New York Times bestseller This Is Your Brain on Music reveals music’s role in the evolution of human culture in this thought-provoking book that “will leave you awestruck” (The New York Times).

Daniel J. Levitin's astounding debut bestseller, This Is Your Brain on Music, enthralled and delighted readers as it transformed our understanding of how music gets in our heads and stays there. Now in his second New York Times bestseller, his genius for combining science and art reveals how music shaped humanity across cultures and throughout history.

Here he identifies six fundamental song functions or types—friendship, joy, comfort, religion, knowledge, and love—then shows how each in its own way has enabled the social bonding necessary for human culture and society to evolve. He shows, in effect, how these “six songs” work in our brains to preserve the emotional history of our lives and species.

Dr. Levitin combines cutting-edge scientific research from his music cognition lab at McGill University and work in an array of related fields; his own sometimes hilarious experiences in the music business; and illuminating interviews with musicians such as Sting and David Byrne, as well as conductors, anthropologists, and evolutionary biologists. The World in Six Songs is, ultimately, a revolution in our understanding of how human nature evolved—right up to the iPod.

Daniel J. Levitin, Ph.D., is the New York Times bestselling author of This Is Your Brain on Music, The World in Six Songs, The Organized Mind, and Weaponized Lies. His work has been translated into 21 languages. An award-winning scientist and teacher, he is Founding Dean of Arts & Humanities at the Minerva Schools at KGI, a Distinguished Faculty Fellow at the Haas School of Business, UC Berkeley, and the James McGill Professor Emeritus of Psychology and Music at McGill University, Montreal, where he also holds appointments in the Program in Behavioural Neuroscience, The School of Computer Science, and the Faculty of Education. Before becoming a neuroscientist, he worked as a session musician, sound engineer, and record producer working with artists such as Stevie Wonder and Blue Oyster Cult. He has published extensively in scientific journals as well as music magazines such as Grammy and Billboard. Recent musical performances include playing guitar and saxophone with Sting, Bobby McFerrin, Rosanne Cash, David Byrne, Cris Williamson, Victor Wooten, and Rodney Crowell.

Praise For The World in Six Songs: How the Musical Brain Created Human Nature…

“Why can a song make you cry in a matter of seconds? Six Songs is the only book that explains why.”—Bobby McFerrin, ten-time Grammy Award-winning artist (“Don't Worry, Be Happy”)

“Exquisitely well-written and easy to read, serving up a great deal of scientific information in a gentle way for those of us who are—or just think we are—a bit science-phobic.”—Huffington Post

“Fascinating. Provides a biological explanation for why we might tap our feet or bob our heads in time with a favorite song, how singing might soothe a baby, and how music emboldens soldiers or athletes preparing for conflict.”—Associated Press