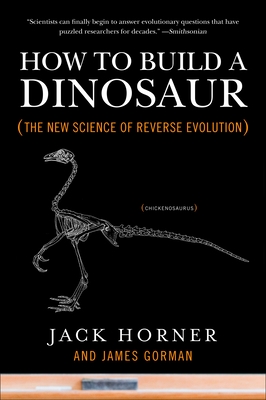 How to Build a Dinosaur

The New Science of Reverse Evolution

A world-renowned paleontologist reveals groundbreaking science that trumps science fiction: how to grow a living dinosaur.

Over a decade after Jurassic Park, Jack Horner and his colleagues in molecular biology labs are in the process of building the technology to create a real dinosaur.

Based on new research in evolutionary developmental biology on how a few select cells grow to create arms, legs, eyes, and brains that function together, Jack Horner takes the science a step further in a plan to "reverse evolution" and reveals the awesome, even frightening, power being acquired to recreate the prehistoric past. The key is the dinosaur's genetic code that lives on in modern birds- even chickens. From cutting-edge biology labs to field digs underneath the Montana sun, How to Build a Dinosaur explains and enlightens an awesome new science.

Praise For How to Build a Dinosaur: The New Science of Reverse Evolution…

A Library Journal Best Science and Technology Book of the Year

“Horner is at his best: provocative yet firmly grounded in science… His goal is to make people think about how evolution works, and by extension, about our own origins.”—New Scientist

“Straight from the scientific frontier, Horner’s work should excite anyone who’s dreamed of walking with dinosaurs.”—Booklist

“Scientists can finally begin to answer evolutionary questions that have puzzled researchers for decades.”—Smithsonian

John “Jack” Horner is one of the world’s foremost paleontologists, credited with finding the first dinosaur eggs in the Western Hemisphere, the first evidence of dinosaur colonial nesting, the first evidence of parental care among dinosaurs, and the first dinosaur embryos. He served as the inspiration for Paleontologist Dr. Alan Grant in Michael Crichton’s Jurassic Park, and as the technical advisor on all of the Jurassic Park films. Horner is Curator of Paleontology at the Museum of the Rockies in Bozeman, Montana, and Regents Professor of Paleontology at Montana State University.

James Gorman is deputy science editor of the New York Times and editor of its Science Times section.
Loading...
or
Not Currently Available for Direct Purchase