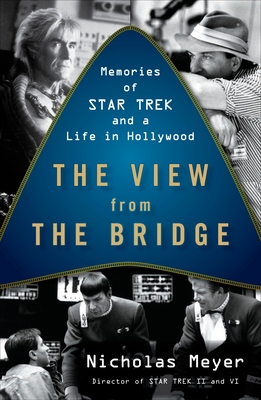 The View from the Bridge

Memories of Star Trek and a Life in Hollywood

"Essential reading for any Star Trek and movie fan."
-trekmovie.com

When Nicholas Meyer was asked to direct the troubled second Star Trek film, he was something less than a true believer. A bestselling author and successful director, he had never been a fan of the TV series. But as he began to ponder the appeal of Kirk, Spock, et al., he realized that their story was a classical nautical adventure yarn transplanted into space and-armed with that insight-set out on his mission: to revitalize Trek.

Praise For The View from the Bridge: Memories of Star Trek and a Life in Hollywood…

"Essential reading for any Star Trek and movie fan."—trekmovie.com

"An engaging read that's all the better for his insights into directing The Day After... Meyer also writes about adapting his best-selling novel The Seven-Per-Cent Solution, for which he was Oscar-nominated in 1977, and making his directorial debut with 1979's Time After Time."—The Gazette (Montreal)

Nicholas Meyer is a screenwriter, producer, author and director, most known for his bestselling novel The Seven-Per-Cent Solution, and for directing the films Time After Time, two of the Star Trek feature film series, and The Day After. He was nominated for an Academy Award for Best Adapted Screenplay. He has also been nominated for a Satellite Award and three Emmy Awards, and has won four Saturn Awards.
Loading...
or
Not Currently Available for Direct Purchase