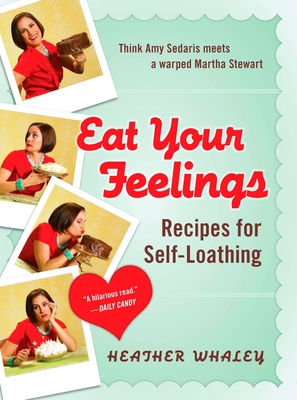 "A hilarious read when you're feelin' down and hungry."—Daily Candy

Life's little pitfalls can be a real drag: being dumped, fired, or left at the altar—they're all such downers. Sure, some might just grin and bear it, but why?

Hilarious author Heather Whaley advises readers to revel in their misery, offering a slew of side-splittingly skewed recipes, each perfect for a different, wretched moment, including:

In the wonderfully perverse tradition of Amy Sedaris's bestselling I Like You, Eat Your Feelings makes the perfect gift, reminding us that food and booze—unlike fair weather friends or your 401K—will never let you down.

Praise For Eat Your Feelings: Recipes for Self-Loathing…

"A hilarious read when you're feelin' down and hungry."—Daily Candy

"I laughed my way through Eat Your Feelings. She has the perfect recipe to cheer you up—no matter what life throws at you."—Every Day with Rachael Ray

"They say the cure for loneliness is laughter... and food. Well, here it is in one hilarious, delicious package."—Christian Lander, New York Times bestselling author of Stuff White People Like

"[It] fills my heart with joy."—The Book Bench, The New Yorker

"Recipes for the confidence-intolerant."—Vanity Fair

"Priceless. For anyone in danger of OD'ing on the profusion of romance... this is the perfect antidote."—Epicurious.com

HEATHER WHALEY is an actress, writer, and lifelong eater. Her play, Social Note, was the first play to appear in the storied Oak Room of the Algonquin Hotel. I Will Not Marry Anthony Porter! debuted Off-Broadway in 2009. Her television pilot, Sharon Shaw, is being developed for Lifetime, and her film project, Adult Children of Divorce, is in production. She lives in New York City with her husband and two children.
Loading...
or
Not Currently Available for Direct Purchase