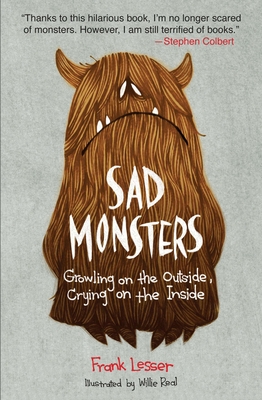 An Emmy Award-winning writer for The Colbert Report follows in the (big) footsteps of Bigfoot: I Not Dead.

Monsters have it tough. Besides being deeply misunderstood, they suffer from very real problems: Mummies have body image issues, Godzilla is going through an existential crisis, and creatures from the black lagoon face discrimination from creatures from the white lagoon. At heart, these monsters are human; after all, you are what you eat. Quirkily illustrated, Sad Monsters hilariously documents the trials and tribulations of all the undead creatures monster-mad readers have grown to love, from vampires and werewolves, to chupacabras and sphinxes, and even claw-footed bathtubs.


Praise For Sad Monsters: Growling on the Outside, Crying on the Inside…

"Thanks to this hilarious book, I'm no longer scared of monsters. However, I am still terrified of books." — Stephen Colbert

"Delightful and definitive proof that the undead are just as unhappy as the rest of us." — Seth Grahame-Smith, author of Pride and Prejudice and Zombies

"Sad Monsters is utterly hilarious. Then scary. Then hilarious again." — Scott Kenemore, author of The Zen of Zombie

"Hilarious. Frank Lesser has done a great service to human-monster relations." -Bob Powers, co-author, The Werewolf's Guide To Life: A Manual For The Newly Bitten

"With <I>Sad Monsters</I>...the joke keeps getting reinvented in creative and wonderful ways. So yes, it's funny — but it's also smart and creative. It begs for public readings." — Orson Scott Card, bestselling author of Ender’s Game

Frank Lesser is a writer for The Colbert Report. He was a film major and editor of the humor magazine at Brown University. He lives in New York.