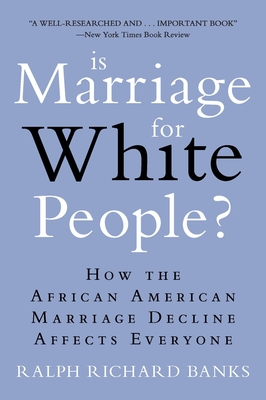 Is Marriage for White People?

How the African American Marriage Decline Affects Everyone

A distinguished Stanford law professor examines the steep decline in marriage rates among the African American middle class, and offers a paradoxical-nearly incendiary-solution.

Black women are three times as likely as white women to never marry.
That sobering statistic reflects a broader reality: African Americans are the most unmarried people in our nation, and contrary to public perception the racial gap in marriage is not confined to women or the poor. Black men, particularly the most successful and affluent, are less likely to marry than their white counterparts. College educated black women are twice as likely as their white peers never to marry.

Is Marriage for White People? is the first book to illuminate the many facets of the African American marriage decline and its implications for American society. The book explains the social and economic forces that have undermined marriage for African Americans and that shape everyone's lives. It distills the best available research to trace the black marriage decline's far reaching consequences, including the disproportionate likelihood of abortion, sexually transmitted diseases, single parenthood, same sex relationships, polygamous relationships, and celibacy among black women.

This book centers on the experiences not of men or of the poor but of those black women who have surged ahead, even as black men have fallen behind. Theirs is a story that has not been told. Empirical evidence documents its social significance, but its meaning emerges through stories drawn from the lives of women across the nation. Is Marriage for White People? frames the stark predicament that millions of black women now face: marry down or marry out. At the core of the inquiry is a paradox substantiated by evidence and experience alike: If more black women married white men, then more black men and women would marry each other.

This book not only sits at the intersection of two large and well- established markets-race and marriage-it responds to yearnings that are widespread and deep in American society. The African American marriage decline is a secret in plain view about which people want to know more, intertwining as it does two of the most vexing issues in contemporary society. The fact that the most prominent family in our nation is now an African American couple only intensifies the interest, and the market. A book that entertains as it informs, Is Marriage for White People? will be the definitive guide to one of the most monumental social developments of the past half century.

Ralph Richard Banks is the Jackson Eli Reynolds Professor of Law at Stanford Law School, where he has taught about marriage, race, discrimination, and inequality since 1998. His writings have appeared in academic journals such as the Stanford Law Review and the Yale Law Journal and in popular publications such as The New York Times, the Los Angeles Times, and the Chicago Tribune. He lives in Palo Alto.
Loading...
or
Not Currently Available for Direct Purchase