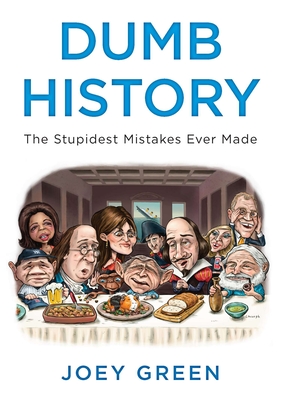 The Stupidest Mistakes Ever Made

A book that proves idiocy is as old as time

Think civilization has deteriorated and that people these days are dumber than ever? Dumb History proves that we didn’t invent stupidity in the 21st century. You’ll find facts from throughout the ages about everyone from Cleopatra and Napoleon to Elvis Presley and even NASA scientists.

• In 820 C.E., Emperor Hsien Tsung’s herbalist presented him with an anti-aging elixir—it killed him
• In 1849, Brooklyn inventor Walter Hunt invented and patented the safety pin and then sold all the rights to his invention for $400. By the time he died penniless, the United States was producing an estimated five billion safety pins annually
• In 1967, voters in the town of Picoaza, Ecuador, elected a brand of foot powder as their new mayor

It’s a wonder we’ve survived as long as we have.

Joey Green is the author of twelve books including the bestselling Polish Your Furniture with Panty Hose series. His titles have sold in the hundreds of thousands. Joey has appeared on The Tonight Show, Late Night, Dateline, CNN Newsnight, Good Morning America, Today, Rosie O'Donnell, and dozens of other national and regional television and radio shows. He has been featured in hundreds of periodicals, including the New York Times, People, Los Angeles Times, and the Washington Post.