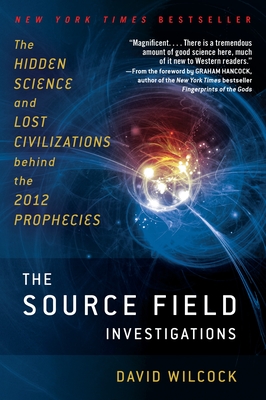 Prepare yourself for a revealing tour through the most incredible scientific mysteries of the world with your guide David Wilcock, the New York Times bestselling author of Awakening in the Dream.

More than two million people have seen David Wilcock’s incredible tour of the 2012 prophecies in his Internet documentary, The 2012 Enigma. Now, he expands his vision with a cutting-edge investigation into alternative sciences with deep insights into what is coming in our immediate future. A stunning synthesis of hidden science and lost prophecies, The Source Field Investigations exposes DNA transformation, wormholes, ancient conspiracies, the Maya calendar, and a new model of galactic energy fields triggering mental, biological, and spiritual evolution.

Unlike the apocalyptic viewpoints depicted in big-budget disaster films, Wilcock believes that 2012 will be a watermark for widespread acceptance of a greater reality—and here, he lays out the blueprints for such a Golden Age.

Praise For The Source Field Investigations: The Hidden Science and Lost Civilizations Behind the 2012 Prophecies…

“Alien enthusiasts who love corroborating proofs will find the large amount of new detail satisfying, and those who find Wilcock personally compelling will love the juicy details of his youth.”—Publishers Weekly

David Wilcock is the New York Times bestselling author of The Source Field Investigations, The Synchronicity Key, The Ascension Mysteries, and Awakening in the Dream. He is also a professional lecturer, filmmaker, and researcher of ancient civilizations, consciousness science, and new paradigms of matter and energy. Wilcock lives in Colorado with his wife.
Loading...
or support indie stores by buying on