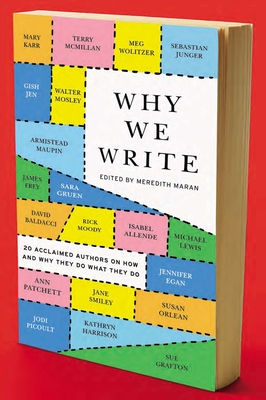 Why We Write (Paperback)

Anyone who's ever sat down to write a novel or even a story knows how exhilarating and heartbreaking writing can be. So what makes writers stick with it? In Why We Write, twenty well-known authors candidly share what keeps them going and what they love most—and least—about their vocation.

Meredith Maran, a passionate reader and writer of memoirs, is the author of thirteen nonfiction books and the acclaimed novel A Theory Of Small Earthquakes. Meredith also writes book reviews, essays, and features for newspapers and magazines including People, The Los Angeles Times, The Boston Globe, The Chicago Tribune, Salon.com, and More. A member of the National Book Critics Circle, Meredith lives in a restored historic bungalow in Los Angeles, and on Twitter at @meredithmaran. Her next memoir is about starting over in Los Angeles.

Praise For Why We Write: 20 Acclaimed Authors on How and Why They Do What They Do…

“If writing were illegal I’d be in prison. I can’t not write. It’s a compulsion.” —David Baldacci

“When I’m writing... I’m living in two different dimensions: this life I’m living now…and this completely other world I’m inhabiting that no one else knows about.” —Jennifer Egan

“Every story is a seed inside of me that starts to grow and grow, like a tumor, and I have to deal with it sooner or later.” —Isabel Allende

“In the beginning, it was that sense of losing time. Now…I have the sense that I can biff the world a bit. I can exert a force.” —Michael Lewis
or support indie stores by buying on
Copyright © 2020 American Booksellers Association