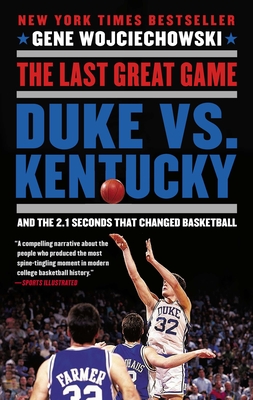 Duke vs. Kentucky and the 2.1 Seconds That Changed Basketball

"A compelling narrative about the people who produced the most spine-tingling moment in modern college basketball history.” –Seth Davis, Sports Illustrated and CBS

March 28, 1992. The final of the NCAA East Regional, Duke vs. Kentucky. Millions could say they witnessed the greatest game and the greatest shot in the history of college basketball. But it wasn’t just the final play—an 80-foot inbounds pass with 2.1 seconds left in overtime—that made Duke’s 104-103 victory so memorable. Each player and coach arrived at that point with a unique story to tell.

In The Last Great Game, ESPN columnist Gene Wojciechowski turns the game we think we remember into a drama filled with suspense, humor, revelations, and reverberations. Not just for Duke or Kentucky fans, this acclaimed New York Times bestseller is for everyone who appreciates the great moments in sports.

Gene Wojciechowski is a senior national columnist for ESPN.com and ESPN The Magazine. Prior to joining ESPN in 1992, he worked as a sports reporter for publications including the Chicago Tribune, The Denver Post, and the L.A. Times. He has received four Associated Press Sports Editors National Writing Awards, among other honors, for his work. He has also authored and co-authored various sports books, including The Bus, a bestselling biography of Jerome Bettis. A former Duke hater, Wojciechowski has made peace with the Blue Devils. He lives in Wheaton, Illinois.

Praise For The Last Great Game: Duke vs. Kentucky and the 2.1 Seconds That Changed Basketball…

“A compelling narrative about the people who produced the most spine-tingling moment in modern college basketball history.” -Sports Illustrated

“[R]ecaptures the energy of one of sport’s greatest moments….A fitting, illuminating tribute to a game that many believe was the best ever.” -Kirkus

“Wojciechowski offers a nice blend of past and present perspectives as he tells the story of how an unlikely classic came to be, how it played out, and how it lives on.” -Christian Science Monitor

"It's Wojciechowski's eye for the people on the edges that make the account especially compelling." -The New Yorker

“[A] fascinating portrait ….This thoroughly enjoyable book will attract college basketball fans across the country, regardless of team loyalties.” -Booklist, starred review

“You think you know all the stories? So did I. But I had not heard these.” -Louisville Courier-Journal
or
Not Currently Available for Direct Purchase
Copyright © 2020 American Booksellers Association