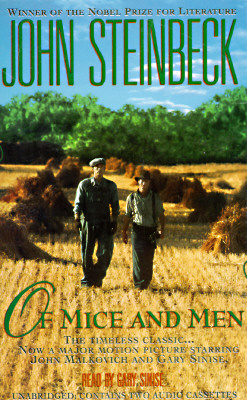 Of Mice and Men was John Steinbeck's first masterpiece. Originally published in 1937, it's the timeless story of George Milton and Lennie Small, ranch hands who drift from job to job, always one step ahead of the law and a few dollars from the poorhouse. George is small, wiry, sharp-tongued and quick-tempered; slow witted Lennie is his opposite—an immense man, brutishly strong but naturally docile, a giant with the mind of a child. Despite their difference, George and Lennie are bound together by a shared vision: their own small farm, where they'll raise cows, pigs, chickens, and rabbits, where they'll be their own bosses and live off the fat of the land.

When they find work on a ranch in California's Salinas Valley, the dream at last seems within reach. If they can just save up a little money. . . . But their hopes, like "the best-laid schemes of mice and men," begin to go awry. The story unfolds with the power and inevitability of a Greek tragedy, as Lennie commits an accidental murder, and George, in a riveting, deeply moving finale, must do what he can to make things turn our right.