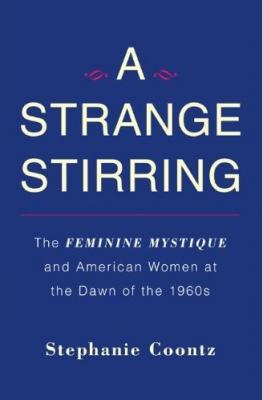 
Praise For A Strange Stirring: The Feminine Mystique and American Women at the Dawn of the 1960s…

“A sharp revisiting of the generation that was floored by Betty Friedan’s The Feminine Mystique (1963), and how the book is still relevant today…. A valuable education for women and men.”

Daniel Horowitz, author of Betty Friedan and the Making of The Feminine Mystique“It Changed My Life was the title of the book Betty Friedan wrote after her transformative 1963 The Feminine Mystique. And change she did the lives of American women. Now in her biography of a classic, Stephanie Coontz imaginatively explores the impact of Friedan’s book. Weaving a rich fabric from what women said in letters and interviews, from articles in popular magazines, current scholarship, and her own astute reading of the 1963 work, Coontz compellingly reveals how generations of women—from the flappers of the 1920s to the bloggers and helicopter moms of today—have responded to the challenges modern women face.” Christie Hefner, former chairman and chief executive officer of Playboy Enterprises and longest serving female C.E.O. of a U.S. public company“As was written about The Feminine Mystique, A Strange Stirring is ‘a journalistic tour de force, combining scholarship, investigative reporting and a compelling personal voice.’ Stephanie Coontz has made a significant contribution to our understanding of the most transformative movement of our lifetimes. Much of what Coontz reports regarding the prevailing ethos of the 1950s as a time of conformity, cultural conservatism and social repressiveness will be fascinating and eye-opening for younger readers. This book is a must read for men as well as for women. And the transformational desire for a work/family balance in life is now reflected not just by gender, but by generation, as both men and women ‘need to grow and fulfill their potentialities as human beings,’ as Friedan wrote almost a half a century ago.” Elizabeth Gilbert, author of Eat, Pray, Love “Stephanie Coontz is not just one of the most important historians in America, she is also a personal hero of mine and a brilliant writer. This book—like all her books before it—has been a marvel and education for me to behold. I am awed by the scope of this research, of this thinking, and I am struck once more by how much there is learned (and taught) about the slow, stubborn advancement of women in America over the last one hundred years. I will keep A Strange Stirring in the forefront of my bookshelf forever.” Library Journal
“Coontz recaptures the impact of Betty Friedan’s The Feminine Mystique when it was published in 1963. Although Friedan claimed credit for initiating the modern feminist movement, Coontz places the book more dispassionately in its historical context as one of many factors working against entrenched gender roles. Still, Coontz demonstrates persuasively that women readers from many backgrounds found relief—some called it life-saving—in knowing that they were not crazy and not alone in their need to find some work independent of their family roles.”

Donna L. Franklin, author of Ensuring Inequality: The Structural Transformation of the African-American Family“This book offers a nuanced perspective on the women’s movement by ending the invisibility of African-American women.” Nancy F. Cott, Trumbull Professor of American History, Harvard University“Stephanie Coontz’s new book takes you on an engrossing and enlightening tour of the past, with wisdom and meaning for the future.” John Bradshaw, author of Reclaiming Virtue and the #1 New York Times bestsellers, Homecoming and Creating Love“Stephanie Coontz continues to amaze me. In her new book, A Strange Stirring, she chronicles the untold story of some of America’s greatest pioneers. This is a must read for all who care about our country’s growth and maturity. We owe the women described here the same gratitude and respect given to Lewis and Clark and the others who carved out this great nation.” Bitch Magazine

“As the author of several books that challenge the accepted historical narrative of ‘traditional’ families and institutions…Coontz soberly checks facts, corrects misinformation, and fills in holes in the record. Most important, she shows how assumptions and misinformation about the past are used not only to paint a distorted picture of how things used to be, but to justify insidious policies and legislation like the Defense of Marriage Act. In her latest work…Coontz focuses on a book we’ve come to take for granted, arguing that it deserves a closer look…. [S]he not only explores the actual content of The Feminine Mystique (going well beyond the usual proclamations about its controversiality and importance), but insists that readers (and, presumably, feminists) figure out how to reconcile our idealized version of history with information that complicates it.” Publishers Weekly

“This perceptive [and] engrossing…book provides welcome context and background to a still controversial bestseller that changed how women viewed themselves.”

Booklist
“Coupling meticulous research with first-person interviews, Coontz challenges a number of Friedan’s assumptions and exaggerations while also revisiting the climate in which the work appeared and giving voice to women for whom The Feminine Mystique was nothing short of a lifesaver…. As women continue to struggle with the effort to balance life and work, Coontz argues that The Feminine Mystique remains as relevant today as when it first appeared. In tracing the roots of current discontents, which Coontz dubs the ‘Supermom Mystique,’ her book is no less required reading than Friedan’s trailblazer.” The Daily Beast, “This Week’s Hot Reads”
“A thoughtful reappraisal of Betty Friedan’s 1960s classic – and a meditation on the ever-evolving role of women in American society.”
Christine Whelan, HuffingtonPost
“[An] excellent new social history of the impact of Betty Friedan’s landmark book on American women…. Coontz is the rare social historian who knows how to weave meticulous research into a compelling narrative of our not-too-distant past…. A Strange Stirring is, in many ways, better than the original. Today the problem has been named, and A Strange Stirring offers poignant personal reactions, accessible history and present-day comparisons to give voice to the modern quest for gender equality.”
BUST
“[E]xcellent, eminently readable…. Coontz’s ‘demystifying’ of both the era and Friedan is an erudite, even-handed look at the explosive feminist undercurrents of the era.”
Louis Menand, The New Yorker
“[A] useful revisiting of Friedan’s book.”
New York Times Book Review
“[A] timely contribution to the conversation about what constitutes progress for women (and for which women) in these days of mommy wars and mama grizzlies…. By considering The Feminine Mystique as one sturdy strand in the complex arguments we’re engaged in to this day, Coontz does Friedan the tremendous favor of pulling her down from heaven and up from hell…. [I]t’s a relief to have the level-headed Coontz providing perspective and taking Friedan’s work and legacy for what it was: stirring, strange, complicated and crucial.”
Salon.com
“A Strange Stirring gives voice to women whose lives were transformed by Friedan’s book, but most compellingly, it sets the historical record straight as far as its impact on families.”
Wall Street Journal“[S]ocial historian Stephanie Coontz…takes a fresh look at The Feminine Mystique by examining its effect on the book’s original readers…. Ms. Coontz usefully debunks some of the myths that have grown up around The Feminine Mystique and Friedan…. [A]n illuminating analysis of the book that helped launch the movement that freed women to participate more fully in American society.”
Bookforum.com
“Coontz reconciles Friedan’s flawed text with its seemingly outsized influence, and deftly depicts the social context for the dramatic testimonials uncovered in Coontz’s research, the revelatory proto-feminist experiences shared by women of her mother’s generation…. [Coontz’s] clear-eyed review of the social data and cultural contradictions of the time…comprise a fascinating and important study. A Strange Stirring…is a book of rigor and undeceiving, one worthy of Friedan’s tradition.”

The Buffalo News
“For some of us, this is a jolting ‘remember when;’ for others, a slice of history forgotten all too soon. For all of us, there remains relevance.”

Bookpage“Packed with fascinating statistics and research on 20th-century American social history, including the effect of ‘liberation’ on middle-class, working-class and African-American women, Coontz shines new light on a landmark work.” Seattle Times
“This book enriches Coontz’s impressive body of work on American family life…. She continues to deftly make history a personal science, persuading readers to ponder those societal yokes we’ve taken up to wear around our own necks…. A Strange Stirring reveals the power of two writers; both are able to see beyond the conventional view and the untold history, and enable the reader to look ahead with new eyes and new questions.”

Ladies Home Journal
“A fascinating examination of Friedan’s much-misunderstood classic, A Strange Stirring should be required reading for any young woman today who believes that she’s ‘not a feminist.’ Not only does Stephanie movingly recount how revelatory The Feminine Mystique was to the millions of discontented housewives who read it, but she also details – with examples that had me shaking my head in stupefaction – the unbridled sexism that characterized life circa 1963.”

Michelle Goldberg, The New Republic
“Coontz recounts the catalytic effect that The Feminine Mystique had on a great many women. Her book is full of stories of desperate, suffering people who realized they weren’t crazy only when they picked up Friedan’s bestseller…. But The Feminine Mystique is not just an artifact of a benighted era. It still contains important lessons about one of the most important questions of all, which is how to create a meaningful, autonomous life.” Women’s Review of Books
“Nearly fifty years after The Feminine Mystique exploded onto the scene, Stephanie Coontz measures Friedan’s outsized reputation against a revealing body of research gleaned from archival sources, oral interviews, and surveys she conducted with nearly 200 women. The result is a brisk, even-handed account of the book’s literary achievements, political limitations, and enduring legacy…. Coontz sheds new light on Friedan’s savvy as both a writer and an activist. But Coontz is as intent on demystifying The Feminine Mystique and stripping away the exaggerated and false claims surrounding it as she is on recounting its merits.”Dissent“[Coontz’s] slim volume makes an illuminating companion to the book it examines…. [The] book is engaging, readable, and brief…. [A] worthwhile review of the changes wrought by the past half-century.” Psychotherapy Networker“Engrossing…. Here, as in her previous books…Coontz does what she does best: differentiates between what we think we know about marriage and family life in previous generations and the historical reality. In this case, that means providing a fresh assessment of the impact that Friedan’s book had on women of different classes and racial backgrounds, even beyond its white, middle-class, target audience.” Choice “Coontz has taken on the job of reevaluating Freidan’s groundbreaking work and explaining why, despite the flaws that modern commentators have emphasized, it remains important…. Coontz makes a solid case for the valuable aspects of Freidan’s analysis, especially her legitimization of the unhappiness experienced by educated post-WWII housewives.”

Stephanie Coontz teaches history and family studies at Evergreen State College. Her books include Marriage, a History, The Way We Never Were, and The Way We Really Are. She lives in Olympia, Washington.
Loading...
or
Not Currently Available for Direct Purchase