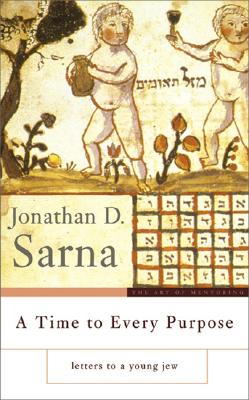 A Time to Every Purpose (Hardcover)

Letters to a Young Jew

At the turn of the twenty-first century, the central question confronting Jewish leaders in America is simple:

Jonathan D. Sarna, acclaimed scholar of American Judaism, believes that “Why be Jewish?” is the wrong question. Judaism, he believes, is not so much a “why” as a way—a way of life, a way of marking time, a way of relating to the environment, to human beings, to family, and to God. Judaism is experienced through doing—doing things Jewish, doing things for fellow Jews in need, doing things as a Jew to improve the state of the world. The more Judaism one does, the more one comes to appreciate what Judaism is.

Using the Jewish calendar as his starting point, Sarna reflects on the major themes of Jewish life as expressed in a full year of holidays—from Passover in the spring to Purim eleven months later. Passover, for instance, yields a discussion of freedom; Shavuot, a discussion of Torah; Yom Kippur, the role of the individual within the Jewish community; Chanukah, issues of assimilation and anti-assimilation.

An essential brief introduction—or reintroduction—to the major practices of Jewish life as well as the many complexities of the American Jewish experience, this book will be essential reading for American Jews and the perfect gift for the holiday season.