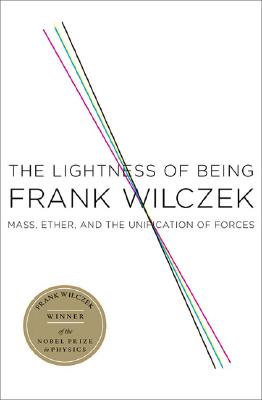 The Lightness of Being

Mass, Ether, and the Unification of Forces

The 2004 Nobel Prize winner in physics brings us tantalizingly close to the long-sought Grand Unification of Forces. And then takes us beyond.


Praise For The Lightness of Being: Mass, Ether, and the Unification of Forces…

Science News
"For a safari-like adventure into the world of physics, follow Wilczek's lead. Quirky but knowledgeable, he explores the essence of the matter that makes up the universe — combining the enthusiasm of someone like Jeff Corwin with the thoughtfulness of a David Attenborough."

American Scientist
“The Lightness of Being does a superb job of introducing the reader…to our current understanding of the nature of matter and the forces that govern the universe…. [A] wonderful program guide to what we can expect from the LHC in the coming years. Stay tuned.”

New York Review of Books
“Frank Wilczek is one of the most brilliant practitioners of particle physics…. It is too soon to tell whether Wilczek will be the new Darwin. His book is not the new Origin of Species. It is more like Darwin’s Voyage of the Beagle, a popular account of a voyage of exploration, describing the landscape and the newly discovered creatures that still have to be explained…. He writes as he thinks, with a lightness of touch that can come only to one who is absolute master of his subject.”

Physics Today
“Wilczek can write with wit, grace, and an uncanny facility for using lightweight language to express heavy-duty ideas. [Readers] will find much of that kind of writing in The Lightness of Being…. Wilczek’s best writing – some of it in this book – is lucid, lively, and illuminating.”

Frank Wilczek won the Nobel Prize in Physics in 2004 for work that he did as a twenty-one-year-old graduate student. His 1989 book, Longing for the Harmonies, was a New York Times Notable Book of the Year. Wilczek's work has been anthologized in Best American Science Writing and The Norton Anthology of Light Verse. He lives in Cambridge, Massachusetts, where he is currently the Herman Feshbach Professor of Physics at MIT.
Loading...
or
Not Currently Available for Direct Purchase