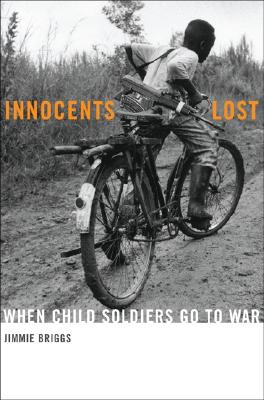 When Child Soldiers Go To War

Ida, a member of Sri Lanka's Female Tamil Tigers, fought with one of the longest-surviving and successful guerilla movements in the world. She is sixteen. Francois, a fourteen-year-old Rwandan child of mixed ethnicity, was forced by Hutu militiamen to hack to death his sister's Tutsi children.More than 250,000 children have fought in three dozen conflicts around the world, but growing exploitation of children in war is staggering and little known. From the "little bees" of Colombia to the "baby brigades" of Sri Lanka, the subject of child soldiers is changing the face of terrorism. For the last seven years, Jimmie Briggs has been talking to, writing about, and researching the plight of these young combatants. The horrific stories of these children, dramatically told in their own voices, reveal the devastating consequences of this global tragedy.Cogent, passionate, impeccably researched, and compellingly told, Innocents Lost is the fullest, most personal and powerful examination yet of the lives of child soldiers.

From covering violence in minority communities to investigating rights abuses, the personal stories of disadvantaged youth have been the focus of Jimmie Briggs' decade-long career. Over the last four years he has focused on child soldiers. As a reporter at LIFE, Briggs was awarded the John Bartlow Martin Award from Northwestern University for a story on the Gulf War's impact on children and became a finalist for the National Magazine Award. In the summer of 1998, he earned an honorable mention in the Dorothea Lange-Paul Taylor Prize competition, and an Individual Project Fellowship from the Open Society Institute to study war-affected children. A year later, Briggs received a commendation from the Congressional Black Caucus for his coverage of AIDS in the black community. He has written for The Washington Post, The Village Voice, EMERGE, VIBE, George, The Source, Junior Scholastic, XXL, The New York Times Magazine and LIFE. He lives in New York City.
Loading...
or
Not Currently Available for Direct Purchase