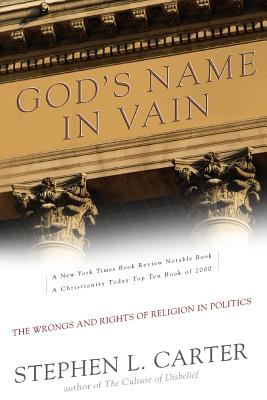 America faces a crisis of legitimacy. It's a crisis that dramatizes the separation of church and state. A crisis that, in the messages sent by our culture, marginalizes religion as a relatively unimportant human activity that plays an unimportant role in the national debate. Because the nation chooses to secularize the principal points of contact between government and people (schools, taxes, marriage, etc.), it has persuaded many religious people that a culture war has been declared. Stephen Carter, in this sequel to his best-selling Culture of Disbelief, argues that American politics is unimaginable without America's religious voice. Using contemporary and historical examples, from abolitionist sermons to presidential candidates' confessions, he illustrates ways in which religion and politics do and do not mesh well and ways in which spiritual perspectives might make vital contributions to our national debates. Yet, while Carter is eager to defend the political involvement of the religious from its critics, he also warns us of the importance of setting some sensible limits so that religious institutions do not allow themselves to be seduced, by the lure of temporal power, into a kind of passionate, dysfunctional, and even immoral love affair. Lastly, he offers strong examples of principled and prophetic religious activism for those who choose their God before their country.

Stephen L. Carter is the William Nelson Cromwell Professor of Law at Yale University, where he has taught since 1982. He is also the author of several books of nonfiction.
Loading...
or support indie stores by buying on