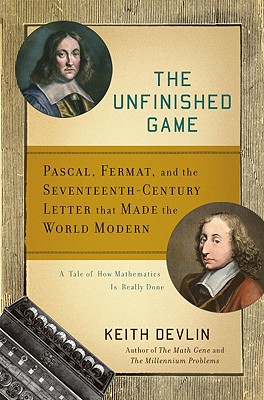 Pascal, Fermat, and the Seventeenth-Century Letter that Made the World Modern

“The work of Blaise Pascal and Pierre de Fermat paved the way for probability theory, which has made much of what we take for granted in the modern world possible. Odds are you'll love this fast-paced and entertaining book as much as I did.”
— Dave Mallmann, Harry W. Schwartz Bookshop, Brookfield, WI
View the List

From NPR’s “Math Guy,” the engaging tale of Blaise Pascal, Pierre de Fermat, and the seventeenth-century letter that created the field of probability.

Keith Devlin is a senior researcher at Stanford University's Center for the Study of Language and Information and its executive director, a consulting professor in the Department of Mathematics, and a co-founder of the Stanford Media X research network and of the university's H-STAR institute. He has written twenty-five books and over seventy-five published research articles. He is the "Math Guy" on National Public Radio. He lives in Palo Alto, California.
Loading...
or
Not Currently Available for Direct Purchase