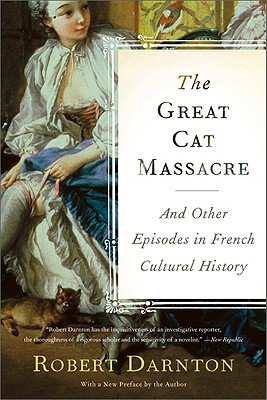 And Other Episodes in French Cultural History

The landmark history of France and French culture in the eighteenth-century, a winner of the Los Angeles Times Book Prize
When the apprentices of a Paris printing shop in the 1730s held a series of mock trials and then hanged all the cats they could lay their hands on, why did they find it so hilariously funny that they choked with laughter when they reenacted it in pantomime some twenty times?

Why in the eighteenth-century version of Little Red Riding Hood did the wolf eat the child at the end?

What did the anonymous townsman of Montpelier have in mind when he kept an exhaustive dossier on all the activities of his native city?
These are some of the provocative questions the distinguished Harvard historian Robert Darnton answers The Great Cat Massacre, a kaleidoscopic view of European culture during in what we like to call "The Age of Enlightenment." A classic of European history, it is an essential starting point for understanding Enlightenment France.

A former professor of European history at Princeton University, Robert Darnton is Carl H. Pforzheimer University Professor and director of the Harvard University Library. The founder of the Guttenberg-e program, he is the author of many books. He lives in Cambridge, Massachusetts.

Praise For The Great Cat Massacre: And Other Episodes in French Cultural History…

"Robert Darnton has the inquisitiveness of an investigative reporter, the thoroughness of a rigorous scholar, and the sensitivity of a novelist."—New Republic

"Brilliant....The job description for the historian is simple; he must read well. Darnton does. He will read anything, take it seriously, and, applying a fertile imagination, write beautifully about what he has learned."—Washington Post Book World

"An exercise in culture shock."—Chronicle of Higher Education
or
Not Currently Available for Direct Purchase
Copyright © 2020 American Booksellers Association