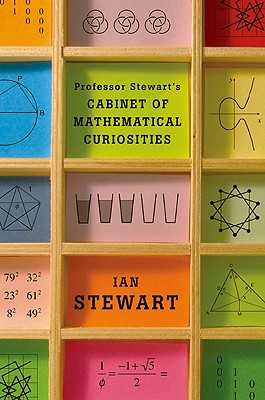 Knowing that the most exciting math is not taught in school, Professor Ian Stewart has spent years filling his cabinet with intriguing mathematical games, puzzles, stories, and factoids intended for the adventurous mind. This book reveals the most exhilarating oddities from Professor Stewart's legendary cabinet.
Inside, you will find hidden gems of logic, geometry, and probability-like how to extract a cherry from a cocktail glass (harder than you think), a pop-up dodecahedron, and the real reason why you can't divide anything by zero. Scattered among these are keys to Fermat's last theorem, the PoincarÃ©onjecture, chaos theory, and the P=NP problem (you'll win a million dollars if you solve it). You never know what enigmas you'll find in the Stewart cabinet, but they're sure to be clever, mind-expanding, and delightfully fun.

"[Armchair mathematicians] are certain to find pleasure in this cornucopia of puzzles, brainteasers, and digressions.... The ideal book for dispelling the supposed drudgery of mathematics with its real magic."—Booklist

"Stewart has a genius for explanation that allows details of the Poincaré conjecture and Riemann hypothesis to sit happily alongside a quip about a chicken crossing a Möbius strip.... Mathematics doesn't come more entertaining than this."—New Scientist

"The exciting side of math--puzzles, games and thrilling oddities."—Chicago Tribune

"What positive integer is equal to its own Scrabble score when spelled out in full? Stewart...offers this and a hodgepodge of other puzzles, paradoxes, brainteasers, tricks, facts and jokes, which he accurately calls 'curiosities.'."—Science News

"Open one of the 179 'drawers' in Professor Stewart's cabinet, and you might find just a one-liner...or a seven-page essay on Fermat's last theorem.... The book can be devoured in one giant gulp or savored, one curiosity at a time."—IEEE Spectrum

Ian Stewart is emeritus professor of mathematics at the University of Warwick. His recent books include Calculating the Cosmos, Significant Figures, In Pursuit of the Unknown, and Professor Stewart's Hoard of Mathematical Treasures. He is a fellow of the Royal Society. He lives in Coventry, UK.
Loading...
or support indie stores by buying on