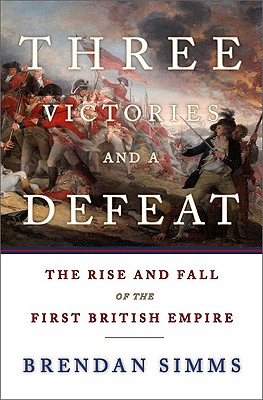 Three Victories and a Defeat (Hardcover)

The Rise and Fall of the First British Empire

In the eighteenth century, Britain became a world superpower through a series of sensational military strikes. Traditionally, the Royal Navy has been seen as Britain's key weapon, but in Three Victories and a Defeat Brendan Simms argues that Britain's true strength lay with the German aristocrats who ruled it at the time. The House of Hanover superbly managed a complex series of European alliances that enabled Britain to keep the continental balance of power in check while dramatically expanding her own empire. These alliances sustained the nation through the War of the Spanish Succession, the War of the Austrian Succession, and the Seven Years' War. But in 1776, Britain lost the American continent by alienating her European allies.

An extraordinary reinterpretation of British and American history, Three Victories and a Defeat is a masterwork by a rising star of the historical profession.

Brendan Simms is a professor in the History of International Relations and fellow at Peterhouse College, Cambridge. He is the author of eight previous books, including The Longest Afternoon: The 400 Men Who Decided the Battle of Waterloo and Europe: The Struggle for Supremacy, from 1453 to the Present, shortlisted for the Lionel Gelber Prize. He lives in Cambridge, UK.
or support indie stores by buying on
Copyright © 2020 American Booksellers Association