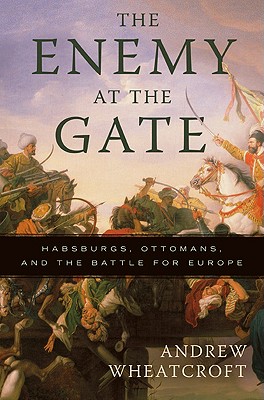 The Enemy at the Gate (Hardcover)

Habsburgs, Ottomans, and the Battle for Europe

In 1683, an Ottoman army that stretched from horizon to horizon set out to seize the “Golden Apple,” as Turks referred to Vienna. The ensuing siege pitted battle-hardened Janissaries wielding seventeenth-century grenades against Habsburg armies, widely feared for their savagery. The walls of Vienna bristled with guns as the besieging Ottoman host launched bombs, fired cannons, and showered the populace with arrows during the battle for Christianity’s bulwark. Each side was sustained by the hatred of its age-old enemy, certain that victory would be won by the grace of God.

The Great Siege of Vienna is the centerpiece for historian Andrew Wheatcroft’s richly drawn portrait of the centuries-long rivalry between the Ottoman and Habsburg empires for control of the European continent. A gripping work by a master historian, The Enemy at the Gate offers a timely examination of an epic clash of civilizations.

Andrew Wheatcroft is Professor of International Publishing and Communication and Director of the Centre for Publishing Studies at the University of Stirling. He is the author of Infidels, The Habsburgs, and The Ottomans, and has been researching the material for The Enemy at the Gate for more than twenty years. He lives in Scotland.

Praise For The Enemy at the Gate: Habsburgs, Ottomans, and the Battle for Europe…

New York Times Book Review
“As Andrew Wheatcroft brilliantly shows in The Enemy at the Gate, the skirmishes and the pitched battles that raged for centuries between Habsburgs and Ottomans, and their numerous vassals on both sides, represented not so much a ‘clash of civilizations’ as a collision of empires…. [H]is narrative is thrilling as well as thoughtful, a rare combination.”

Washington Times
“There are two stories here worth telling and well told: the blood-and-thunder tale of the heroic defense of Vienna against the Ottomans in 1683, the surge in morale after the Habsburg victory, and the war to recover Hungary and the Balkans from the Turks. The other story is of the obsessive fear and hatred of the Turks in Christian central Europe, exorcised by the Habsburg victory at Vienna, turning to revenge and reconquest led first by Duke Charles of Lorraine, then by the legendary Prince Eugene of Savoy, ending in exhausted and bankrupt stability.”

Telegraph
“[A] riveting narrative, Andrew Wheatcroft’s The Enemy at the Gate…tells the story of the final Habsburg-Ottoman showdown at the gates of Vienna in 1683, one of the genuine turning points in European history.”

Independent
“Andrew Wheatcroft’s The Enemy at the Gate: Habsburgs, Ottomans and the Battle for Europe brilliantly reconstructs the climactic conflict between Muslim ‘East’ and Christian ‘West’, at Vienna in 1683.”

Telegraph
“A masterpiece of historical writing….The story of the siege reads as compellingly as a Dumas novel.”

Literary Review
“Intensely gripping… The Enemy at the Gate is rich and multilayered… Wheatcroft has done us all a service.”

Sunday Telegraph
“A fascinating and compelling story, a clash between a mighty besieging army and one of the major cities of Europe, involving extraordinary efforts and sacrifices on both sides.”

Financial Times
“Ambitious…Wheatcroft is undeniably expert in his field.”

Times Higher Education Supplement
“It is one of the book's strengths that it demonstrates how far Ottomans, Habsburgs and the rest of Europe lived in a common world with borders that were more porous than we usually imagine.”

The Weekly Standard
“ “[Wheatcroft’s] fourth book is primarily a military history of the clashes between the Habsburg and Ottoman Empires in the 17th century, the fruit of more than 20 years researching in the field…. Some of the most suggestive material here is on military organization, equipment, and tactics.”

Victor Davis Hanson, First Things
“Wheatcroft offers a riveting account of the slow, methodical Ottoman approach to Vienna…. [A] masterful account of the siege and battle.”

Michigan War Studies Review
“Wheatcroft displays exceptional awareness of the power of the printed word not only to crystallize and reproduce specific facts or news for a mass audience, but to preserve and especially propagate a particular opinion of a given subject. Throughout, he strives to distinguish between the actual siege of Vienna in 1683 and the one preserved in the Western imagination, noting print’s power to distort and undervalue the humanity of the Ottoman Turks.”

Choice
“Wheatcroft’s real contribution is his illustration of complex Ottoman administrative and military structures. In fact, the book reveals these to have been a main source of Ottoman power; not, as many have suggested, the provocation of fear through terror or oriental savagery. Wheatcroft also adeptly addresses important historiographical questions about Ottoman decline, the dangers of over-reliance on secondary source materials, syncretism of nomadic steppe tradition with Islamic values, and fine contrasts between Ottoman and European military techniques.”

Journal of Military History
“Andrew Wheatcroft writes exciting and provocative books, and The Enemy at the Gate is no exception…. As battle history this book is great…. The descriptions of the fortifications, weapons, tactics, attacks, and counterattacks are vivid and compelling…. Even though the reader knows how the siege will turn out, he/she is eager to turn the next page to see if the next explosion and attack will enable the Turks to get into the city.”