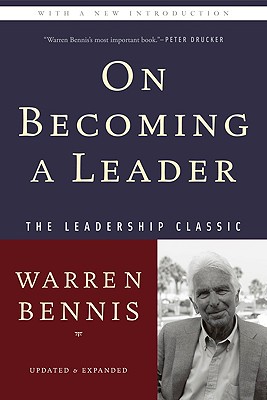 On Becoming a Leader

A timeless classic from a pioneer in the field of leadership studies-the only book you need to read on becoming an effective leader.

Warren Bennis (1925-2014) was a pioneer in leadership studies, a scholar who advised presidents and business executives alike on how to become successful leaders. On Becoming a Leader is his seminal work, exemplifying Bennis's core belief that leaders are not born-they are made. In a world increasingly defined by turbulence and uncertainty, the call to leadership is more urgent than ever. Providing essential and timeless insights for generations of readers, On Becoming a Leader delves into the qualities that define leadership, the people who exemplify it, and the strategies that anyone can apply to achieve it.

Dubbed the "dean of leadership gurus" by Forbes magazine, Bennis remains the final word in modern leadership. This seminal work is a must-read for anyone who aspires to leadership excellence.

Praise For On Becoming a Leader…

"On Becoming a Leader is the indispensable handbook for anyone who had become a leader. Warren Bennis maps the terrain of leadership with a rare sense of wisdom and authority."
—Daniel Goleman

"Only Warren Bennis could write a book on leadership that is so inspiring and insightful, captivating and wise, eloquent and revealing. His beautifully crafted stories of outstanding leaders and their fascinating paths to power are sure to launch an exciting journey of self-exploration for future leaders."—Rosabeth Moss Kanter

"Warren Bennis-master practitioner, researcher, and theoretician all in one-has managed to create a practical primer for leaders without sacrificing an iota of necessary subtlety and complexity. No topic is more important; no more able and caring person has attacked it."—Tom Peters

"Warren Bennis's pioneering work is so central in the field of leadership studies that many of us forget that he was the source of numerous foundational ideas."—Howard Gardner

"Warren Bennis's insight and his gift with words make these lessons, from some of America's most interesting leaders, compelling reading for every executive."—Charles Handy

In 2007, BusinessWeek called him one of ten business school professors who have had the greatest influence on business thinking. He has received twenty honorary degrees and has served on numerous boards of advisors. He authored dozens of articles and over thirty books on leadership, including On Becoming a Leader and Organizing Genius.
Loading...
or support indie stores by buying on