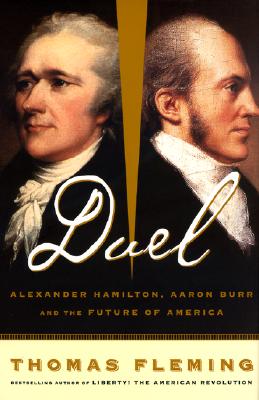 Alexander Hamilton, Aaron Burr, And The Future Of America

All school children know the story of the fatal duel between Hamilton and Burr - but do they really? In this remarkable retelling, Thomas Fleming takes the reader into the post-revolutionary world of 1804, a chaotic and fragile time in the young country as well as a time of tremendous global instability. The success of the French Revolution and the proclamation of Napoleon as First Consul for Life had enormous impact on men like Hamilton and Burr, feeding their own political fantasies at a time of perceived Federal government weakness and corrosion. Their hunger for fame spawned antagonisms that wreaked havoc on themselves and their families and threatened to destabilize the fragile young American republic. From that poisonous brew came the tangle of regret and anger and ambition that drove the two to their murderous confrontation in Weehawken, New Jersey. Readers will find this is popular narrative history at its most authoritative, and authoritative history at its most readable.

Thomas Fleming, a distinguished historian and author of more than fifty books, was a frequent guest on PBS, A&E, and the History Channel. He also contributed articles to American Heritage, MHQ: The Quarterly Journal of Military History, and many other magazines.

Praise For Duel: Alexander Hamilton, Aaron Burr, And The Future Of America…

"Fleming describes the fateful duel beautifully.... Duel is thoroughly well-written, at once fascinating and instructive. It's almost impossible not to love this book."—Chicago Tribune

"[A] stunning panorama...masterfully concise.... Duel does a scintillating job of restoring salient edges that decades of historical buffing have rounded."
—Kirkus Reviews

"Fleming takes one of the most electrifying stories involving our nation's Founding Fathers and tells it electrically."—St. Louis Post Dispatch

"Thomas Fleming skillfully and vividly re-creates this tumultuous period of the post-1970s that put Hamilton and Burr on their fateful collision course."—Dallas Morning News
or
Not Currently Available for Direct Purchase
Copyright © 2020 American Booksellers Association