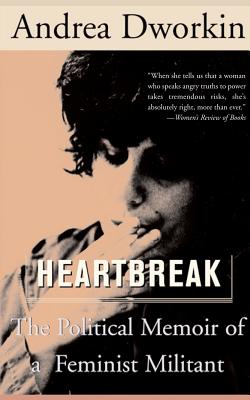 The Political Memoir of a Feminist Militant

Always innovative, often controversial, and frequently polarizing, Andrea Dworkin has carved out a unique position as one of the women's movement's most influential figures, from the early days of consciousness-raising to the "post-feminist" present. A tireless defender of women's rights, especially the rights of those who have been raped and assaulted, and a relentless critic of pornography, Dworkin is one of feminism's most rigorous minds and fiercest crusaders. Now, in Heartbreak, Dworkin reveals for the first time the personal side of her lifelong journey as activist and writer. By turns wry, spirited, and poignant, Dworkin tells the story of how she evolved from a childhood lover of music and books into a college activist, embraced her role as an international advocate for women, and emerged as a maverick thinker at odds with both the liberal left and the mainstream women's movement. Throughout, she displays a writer's genius for expressing emotional truth and an intellectual's gift for conveying the excitement of ideas and words. Beautifully written and surprisingly intimate, Heartbreak is a portrait of a soul, and a mind, in the making. From Hearthbreak: "How did I become who I am? I have a heart easily hurt. I believed that cruelty was most often caused by ignorance. I thought that if everybody knew, everything would be different. I was a silly child who believed in the revolution. I was torn to pieces by segregation and Viet Nam. Apartheid broke my heart. Apartheid in Saudi Arabia still breaks my heart -- I don't understand why every story about rising oil prices does not come with an addendum about the domestic imprisonment of women in the Gulf states. I can't be bought or intimidated because I'm cut down in the middle. I walk with women whispering in my ears. Every time I cry there's a name attached to each tear."

Andrea Dworkin was the co-author, with Catharine A. MacKinnon, of civil rights legislation recognizing pornography as legally actionable sex discrimination. She wrote eleven books, including Pornography, Heartbreak, and Scapegoat. She died in April 2005 in Washington, D.C. Ariel Levy is a contributing editor at New York magazine, and the author of Female Chauvinist Pigs. She lives in New York City.
or support indie stores by buying on
Copyright © 2020 American Booksellers Association