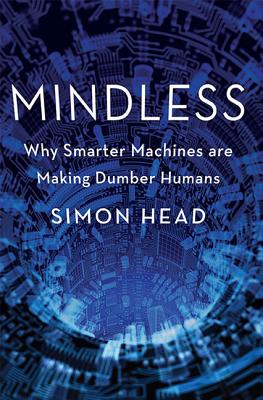 We live in the age of Computer Business Systems (CBSs) -- the highly complex, computer-intensive management programs on which large organizations increasingly rely. In Mindless, Simon Head argues that these systems have come to trump human expertise, dictating the goals and strategies of a wide array of businesses, and de-skilling the jobs of middle class workers in the process. CBSs are especially dysfunctional, Head argues, when they apply their disembodied expertise to transactions between humans, as in health care, education, customer relations, and human resources management. And yet there are industries with more human approaches, as Head illustrates with specific examples, whose lead we must follow and extend to the mainstream American economy.

Mindless illustrates the shortcomings of CBS, providing an in-depth and disturbing look at how human dignity is slipping as we become cogs on a white collar assembly line.

Praise For Mindless: Why Smarter Machines are Making Dumber Humans…

Robert Skidelsky, author of Keynes: The Return of the Master
“With insight and clarity, Simon Head describes the insidious effects of combining scientific management with IT systems and its propensity to create a world of top-down control, where workers are stripped of skills and satisfaction in their work. His fascinating account ranges from Walmart and Amazon's tightly controlled supply chains to Goldman Sachs's manipulation of sub-prime mortgages. In doing so he shows how the drive to automate human abilities and increase profits has depressed wages and undermined economies.”

Paul Duguid, co-author of The Social Life of Information
“The world abounds in enthusiastic technologists offering their vision of the ideal, democratic future to which technology will deliver us, if only we are willing to follow. Simon Head's penetrating Mindless, with its well-chosen and impressively unpredictable case studies of Computer Business Systems in the workplace, the military, and academia, gives us reasons—and the tools—to question such advice. Importantly, Head shows us that the future is not inevitable. We have choices, and for the good of society we need to make them.”—-

New York Review of Books
"[An] arresting new book... Head offers a powerful indictment of contemporary Anglo-American Capitalism... He brilliantly translates ideas remote from the experience of most people into everyday language... [and] deconstructs and demystifies the pseudoscientific, abstract, jargonized language of management studies in order to reveal the dispiriting realities it obscures."

Kirkus Reviews, Starred Review
“A dark, revealing view of computerized control and monitoring of the workplace… A sobering, important book.”

Richard Sennett, author of Together: The Rituals, Pleasures and Politics of Cooperation
“The regimented society has arrived, and Simon Head is its most probing critic. He not only shows the grip of computerized bureaucracy on people's lives, he also analyzes the economic interests and political processes which drive regimentation. This wide-ranging book is clearly and at times eloquently written. A must-read.”—-

Simon Head, a Senior Fellow at the Institute for Public Knowledge at New York University and Senior Member of St. Antony's College at Oxford University, serves as the Director of Programs at the New York Review of Books Foundation. He divides his time between Oxford, England and New York.
Loading...
or
Not Currently Available for Direct Purchase