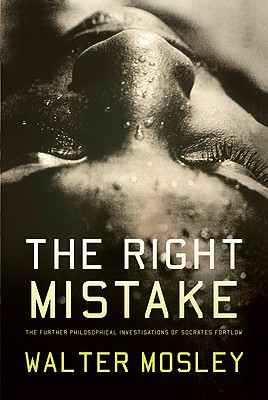 Living in south central L.A., Socrates Fortlow is a sixty-year-old ex-convict still strong enough to kill men with his bare hands. Filled with profound guilt about his own crimes and disheartened by the chaos of the streets, Socrates calls together local people of all races and social stations and begins to conduct a Thinkers' Club, where all can discuss life's unanswerable questions.

Infiltrated by undercover cops and threatened by strain from within, the Thinkers' Club doesn't't have it easy. But simply by debating racial authenticity, street justice, and the possibility of mutual understanding, Socrates and his unlikely crew actually begin to make a difference.

The Right Mistake is Walter Mosley at his most incisive. At once an affectionate and coruscating portrait of ghetto life, it abides the possibility of personal redemption and even, with great struggle, social change.

Walter Mosley is one of America's most celebrated and beloved writers. A Grand Master of the Mystery Writers of America, he has won numerous awards, including the Anisfield-Wolf Award, a Grammy, a PEN USA's Lifetime Achievement Award, and several NAACP Image Awards. His books have been translated into more than twenty languages.