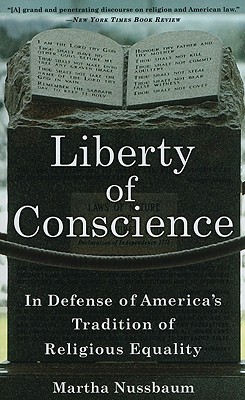 In Defense of America's Tradition of Religious Equality

In one of the great triumphs of the colonial and Revolutionary periods, the founders of the future United States overcame religious intolerance in favor of a constitutional order dedicated to fair treatment for people's deeply held conscientious beliefs. It granted equal liberty of conscience to all and took a firm stand against religious establishment. This respect for religious difference, acclaimed scholar Martha Nussbaum writes, formed our democracy. Yet today there are signs that this legacy is misunderstood. The prominence of a particular type of Christianity in our public life suggests the unequal worth of citizens who hold different religious beliefs, or no beliefs. Other people, meanwhile, seek to curtail the influence of religion in public life in a way that is itself unbalanced and unfair. Such partisan efforts, Nussbaum argues, violate the spirit of our Constitution. Liberty of Conscience is a historical and conceptual study of the American tradition of religious freedom. Weaving together political history, philosophical ideas, and key constitutional cases, this is a rich chronicle of an ideal of equality that has always been central to our history but is now in serious danger.

Martha Nussbaum, one of the leading moral philosophers of our time, holds appointments in the Law School, Divinity School, and Philosophy Department at the University of Chicago and is a board member in the university's Human Rights Program. She is the author of twelve previous books on philosophy and ethics. Her book Cultivating Humanity won the Grawemeyer Award for Education. The recipient of twenty-two honorary degrees from universities around the world, she lives in Chicago, Illinois.
or support indie stores by buying on
Copyright © 2020 American Booksellers Association