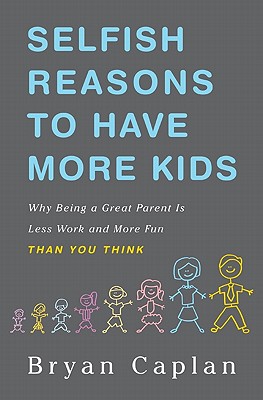 Selfish Reasons to Have More Kids


Praise For Selfish Reasons to Have More Kids: Why Being a Great Parent is Less Work and More Fun Than You Think…

Tyler Cowen, Holbert C. Harris Professor of Economics, George Mason University
“This is one of the best books on parenting, ever.  It will bring life into the world, knowledge to your mind, and joy into your heart.” Judith Rich Harris, author of The Nurture Assumption and No Two Alike

“A lively, witty, thoroughly engrossing book. Bryan Caplan looks at parenting from the viewpoint of an economist, as well as a father. His conclusions may surprise you but he has the data to back them up.” Robert Plomin, Medical Research Council Research Professor at the Institute of Psychiatry

“I loved this book. Selfish Reasons to Have More Kids should be required reading for parents—as it will be for my children, who are now having their own kids and getting caught up in the more-work, less-fun traps of parenting covered here. And as a geneticist, I can report that Bryan Caplan has the facts right. Even better, he interprets those facts in a way that will change our view of parenting.” Reason“Economist Brian Caplan: Kids can be cheaper than you think ...so maybe you want more of them than you think you want. He makes the case for this controversial proposition at length in his fascinating and well-argued new book Selfish Reasons to Have More Kids: Why Being a Great Parent is Less Work and More Fun Than You Think.” Fabio Rojas, OrgTheory.net, Associate Professor of Sociology at Indiana University“Selfish Reasons to Have More Kids is a new book by economist and blogger Bryan Caplan. It makes a simple argument of extreme importance: you should probably have more children. Though this book is written by an economist, it’s not another cute-o-nomics pop text. It’s a serious book about family planning that’s based on his reading of child development, psychology, genetics, economics, and other fields. It’s about one of life’s most important decisions, and this is what social scientists should be thinking about.” Kirkus Reviews“[T]he author’s mission is noble—encouraging individuals to parent two or more children.” Steven Pinker, Harvard College Professor of Psychology, Harvard University, and author of How the Mind Works and The Blank Slate“Original, lively, well-researched, and wise, this book could change your life.” Lenore Skenazy, author of the book and blog, Free-Range Kids“Imagine this: Parenting doesn’t HAVE to be a chore. Your kids are safer than you think, smarter than you think and besides—you have less influence than you think! So sit back, relax, and read this book with your newfound free time. The sanity you save may be your own.” Tim Harford, author of The Undercover Economist and Adapt

“Provocative, fascinating, and utterly original, Bryan Caplan’s book overturns the conventional wisdom about why parenting matters.” Wall Street Journal“Despite its wickedly subversive premise, Mr. Caplan's book is cheery and intellectually honest. . . . And the bedrock of his argument is solid: Modern parenting is insane. Children do not need most of what we buy them. So, yes, the “price” of children is artificially high. . . . The best argument for children isn't that they will make you happy or your life fun but that parenthood provides purpose for a well-lived life.” Motoko Rich, New York Times“Mr. Caplan, who has already been dubbed the ‘Un-Tiger Mom,’ writes, ‘While healthy, smart, happy, successful, virtuous parents tend to have matching offspring, the reason is largely nature, not nurture.’. . .  His argument may be refreshing in an era of competitive preschool admissions and hyperactive extracurricular schedules.” Chattanooga Times Free Press

“In a nutshell, Caplan believes that parents put too much pressure on themselves to raise perfect children, when there is very little evidence that hyper-parenting does much good and plenty of evidence that it does harm by stressing parents out. . . . [M]ost kids just need a calm house with parents who love them, he says.  Deep down, most of us know that. And once you release yourself from the drudgery of perfect parenting, your kids will relax and probably flourish, too.” National Review“Even if Selfish Reasons to Have More Kids won’t actually convince people to have more kids, it serves as both a brief and remarkably well-written introduction to genetic research, and a guide book for easier parenting.  The Tiger Mothers of the world would be well served by reading it.” Steve Silver, movie critic for The American Conservative“[A] delightful book, breezy in prose style, but reasonably rigorous in its handling of the nature-nurture statistics.” Washington Times“Bryan Caplan’s book Selfish Reasons to Have More Kids: Why Being a Great Parent Is Less Work and More Fun Than You Think stands as a bridge across an economic and psychological gap.  This isn’t your average parenting book spouting psychologist-laden babble about the inner workings of the human psyche, inherent selfishness and bearing children.  Rather, Mr. Caplan… hopes to persuade interested parties that it’s not only better to have children in the first place, but to have lots, or at least more than the number you originally were planning to have.” The Atlantic, Business Channel “A direct blow to Tiger Moms around the world… The Caplan Theory is a bit like the Ferber method writ large: If you stop worrying and let the kid be for now, everybody will be happier tomorrow.”

Art Caden, Forbes.com “George Mason University economist Bryan Caplan is one of my favorite thinkers… I agree with the back-cover blurb from Tyler Cowen: Caplan has written ‘one of the best books on parenting, ever.’ Caplan combines his mastery of the economic way of thinking, a thorough command of the best and most relevant scholarly literature, a passion for his subject, and most importantly, his passion for his children into a book that is truly unique. If you are going to read just one book about parenting, it should be this one.”

Bryan Caplan is a Professor of Economics at George Mason University and blogger at EconLog, one of the Wall Street Journal's Top 25 Economics Blogs. He lives in Oakton, Virginia, with his wife and their three children.
Loading...
or
Not Currently Available for Direct Purchase