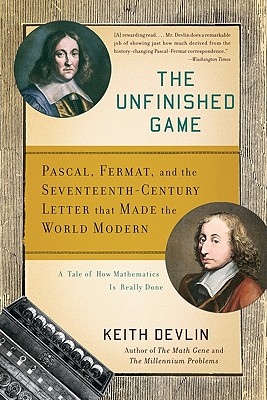 Pascal, Fermat, and the Seventeenth-Century Letter that Made the World Modern

“The work of Blaise Pascal and Pierre de Fermat paved the way for probability theory, which has made much of what we take for granted in the modern world possible. Odds are you'll love this fast-paced and entertaining book as much as I did.”
— Dave Mallmann, Harry W. Schwartz Bookshop, Brookfield, WI
View the List

In the early seventeenth century, the outcome of something as simple as a dice roll was consigned to the realm of unknowable chance. Mathematicians largely agreed that it was impossible to predict the probability of an occurrence. Then, in 1654, Blaise Pascal wrote to Pierre de Fermat explaining that he had discovered how to calculate risk. The two collaborated to develop what is now known as probability theory -- a concept that allows us to think rationally about decisions and events.

In The Unfinished Game, Keith Devlin masterfully chronicles Pascal and Fermat's mathematical breakthrough, connecting a centuries-old discovery with its remarkable impact on the modern world.

Keith Devlin is a Senior Researcher and Executive Director at Stanford's Center for the Study of Language and Information, a Consulting Professor in the Department of Mathematics, and a co-founder of the Stanford Media X research network. National Public Radio's "Math Guy," he is the author of over twenty-five books. He lives in Stanford, California.
Loading...
or support indie stores by buying on