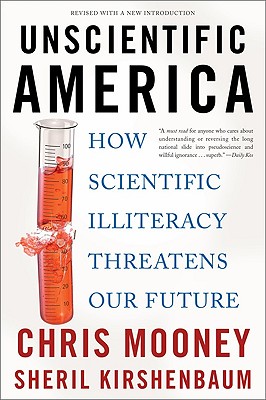 How Scientific Illiteracy Threatens our Future

In his famous 1959 Rede lecture at Cambridge University, the scientifically-trained novelist C.P. Snow described science and the humanities as "two cultures," separated by a "gulf of mutual incomprehension." And the humanists had all the cultural power -- the low prestige of science, Snow argued, left Western leaders too little educated in scientific subjects that were increasingly central to world problems: the elementary physics behind nuclear weapons, for instance, or the basics of plant science needed to feed the world's growing population.

Now, Chris Mooney and Sheril Kirshenbaum, a journalist-scientist team, offer an updated "two cultures" polemic for America in the 21st century. Just as in Snow's time, some of our gravest challenges -- climate change, the energy crisis, national economic competitiveness -- and gravest threats -- global pandemics, nuclear proliferation -- have fundamentally scientific underpinnings. Yet we still live in a culture that rarely takes science seriously or has it on the radar.

For every five hours of cable news, less than a minute is devoted to science; 46 percent of Americans reject evolution and think the Earth is less than 10,000 years old; the number of newspapers with weekly science sections has shrunken by two-thirds over the past several decades. The public is polarized over climate change -- an issue where political party affiliation determines one's view of reality -- and in dangerous retreat from childhood vaccinations. Meanwhile, only 18 percent of Americans have even met a scientist to begin with; more than half can't name a living scientist role model.

For this dismaying situation, Mooney and Kirshenbaum don't let anyone off the hook. They highlight the anti-intellectual tendencies of the American public (and particularly the politicians and journalists who are supposed to serve it), but also challenge the scientists themselves, who despite the best of intentions have often failed to communicate about their work effectively to a broad public -- and so have ceded their critical place in the public sphere to religious and commercial propagandists.

A plea for enhanced scientific literacy, Unscientific America urges those who care about the place of science in our society to take unprecedented action. We must begin to train a small army of ambassadors who can translate science's message and make it relevant to the media, to politicians, and to the public in the broadest sense. An impassioned call to arms worthy of Snow's original manifesto, this book lays the groundwork for reintegrating science into the public discourse -- before it's too late.

Chris Mooney is the author of The Republican War on Science and Storm World. A Knight fellow in science journalism at MIT, he contributes to many publications, including Mother Jones, Wired, the Boston Globe, and Slate. He lives in Cambridge, Massachusetts.

Sheril Kirshenbaum is Associate in Research for Ocean and Coastal Policy at Duke University's Nicholas Institute for Environmental Policy Solutions. She lives in Durham, North Carolina.
Loading...
or
Not Currently Available for Direct Purchase