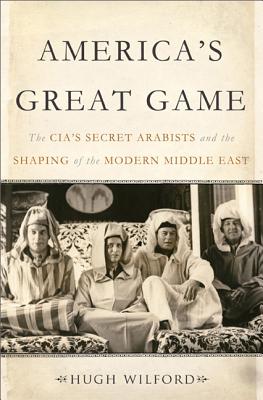 From the 9/11 attacks to waterboarding to drone strikes, relations between the United States and the Middle East seem caught in a downward spiral. And all too often, the Central Intelligence Agency has made the situation worse. But this crisis was not a historical inevitability -- far from it. Indeed, the earliest generation of CIA operatives was actually the region's staunchest western ally.

In America's Great Game, celebrated intelligence historian Hugh Wilford reveals the surprising history of the CIA's pro-Arab operations in the 1940s and 50s by tracing the work of the agency's three most influential -- and colorful -- officers in the Middle East. Kermit "Kim" Roosevelt was the grandson of Theodore Roosevelt and the first head of CIA covert action in the region; his cousin, Archie Roosevelt, was a Middle East scholar and chief of the Beirut station. The two Roosevelts joined combined forces with Miles Copeland, a maverick covert operations specialist who had joined the American intelligence establishment during World War II. With their deep knowledge of Middle Eastern affairs, the three men were heirs to an American missionary tradition that engaged Arabs and Muslims with respect and empathy. Yet they were also fascinated by imperial intrigue, and were eager to play a modern rematch of the "Great Game," the nineteenth-century struggle between Britain and Russia for control over central Asia. Despite their good intentions, these "Arabists" propped up authoritarian regimes, attempted secretly to sway public opinion in America against support for the new state of Israel, and staged coups that irrevocably destabilized the nations with which they empathized. Their efforts, and ultimate failure, would shape the course of U.S. -- Middle Eastern relations for decades to come.

Praise For America's Great Game: The CIA's Secret Arabists and the Shaping of the Modern Middle East…

Ian Johnson, author of A Mosque in Munich: the Nazis, the CIA and the Rise of the Muslim Brotherhood
“Filled with rich anecdotes and unbelievably larger-than-life characters, Hugh Wilford's book is long overdue. Readers have long been familiar with Britain's ‘Great Game' in the 19th century to control Central Asia, but America's ill-fated gamesmanship to control the Middle East is equally riveting and star-crossed. Using newly available archives, Wilford tells the dramatic story of romantically pro-Arab American intelligence operatives who, paradoxically, laid the groundwork for an America despised in the region and involved in an endless series of wars. This makes America's Great Game more than a great adventure story; it's the missing backstory to an ongoing foreign policy tragedy.”

Jeremi Suri, author of Liberty's Surest Guardian: American Nation-Building from the Founders to Obama
“America's Great Game is an epic story of how the American search for adventure and idealism contributed to coups and counter-revolutions in the Middle East. Drawing on extensive research, Wilford explains the rise of the CIA, the tortured American relationship with Arabs and Jews, and Washington's Cold War complicity with British imperial interests. What makes this book most enthralling is that the author builds the story around the grandsons of Theodore Roosevelt. This is a valuable history and a fascinating read—a true page-turner.”

Kai Bird, co-author of American Prometheus: The Triumph and Tragedy of J. Robert Oppenheimer and author of Crossing Mandelbaum Gate
“Fascinating and authoritative. Hugh Wilford has written a lively, witty account of the CIA's escapades in the Middle East during the late 1940s and 1950s. Wilford uses the colorful life stories of cousins Kim and Archie Roosevelt—and their fellow covert operator Miles Copeland—to explain America's troubled historical relationship with Israel and the modern Arab world. This book is both an entertaining biography and a ground-breaking piece of critical history.”

Salim Yaqub, University of California, Santa Barbara, author of Containing Arab Nationalism: The Eisenhower Doctrine and the Middle East
“From the grim vantage of our own era, it is easy to forget — or startling to learn for the first time — that the CIA's interactions with the Middle East began on a more hopeful basis, and were often spearheaded by individuals who strongly sympathized with the political aspirations of Arabs and Muslims. Through exhaustive research, keen insight, and vivid and witty prose, Hugh Wilford brilliantly recreates the lives and milieus of the adventurers, scholars, policymakers, and polemicists who forged America's covert relations with the countries and peoples of the Middle East. Without romanticizing their exploits, or overlooking their moments of hubris, obtuseness, and insensitivity, Wilford helps us see the world as they saw it and, perhaps, better understand the world they made. This is collective biography at its best.”

Boston Globe
“They were romantics and spies. They opposed Communism and supported Arab interests. They were susceptible to the American missionary impulse in foreign policy and the dreamy British view of the Middle East as a staging ground for heroics and adventure. They were the Arabists of America's clandestine services and for decades their story has been shrouded in mystery — and misunderstanding.... [Hugh Wilford's] chronicle of their adventures and, more often, their misadventure, makes for compelling, illuminating reading.”

Los Angeles Times
“There are cross-currents and intrigues aplenty in America's Great Game: British spies versus American spies, rivalry between the State Department and the CIA, career conflicts between various American officials and the role of U.S. advertising executives: ‘Mad Men' in the Middle East. A clean writer and top-notch researcher, Wilford tells his tale briskly.”

Times Literary Supplement, UK
“An absorbing account of romantics enchanted by Kiplingesque myths and the Lawrence of Arabia legend, who cynically harboured the self-contradictory ambition of democratizing the Arab world and Iran while arrogating all decisions to themselves.”

Bustan: The Middle East Book Review
“[An] engaging book.... [T]his is a book that adds an important dimension to standard accounts, and in a few places brings to the surface new facts. As a special bonus, the story is well told and a pleasure to read.”

Library Journal, starred review
“A lively and well-balanced examination of American muddling and vacillating in the Middle East. Highly recommended for readers interested in modern Middle East history and those curious about the complicated threads of idealism, adventurism, and imperialism confusing American foreign policy.”

Kirkus
“By turns admiring and critical play-by-play of CIA Arabists as they directed the Cold War's Middle East chessboard.... [An] insightful examination of these ‘Mad Men on the Nile.'”

Eugene Rogan, author of The Arabs: A History
“A gripping account of how America's best and brightest, with the best of intentions, lost the Arabs and Iranians at the start of the Cold War. An outstanding book, more relevant today than ever.”

Literary Review, UK
“[An] enjoyable new book.... It would be a dull book that confined itself to established facts, but brilliantly – and through meticulous research – [Wilford] justifies including the most colourful stories by supplying reassuring glosses on how far they should be believed…. It may not tell the whole truth but, as an attempt to penetrate and explain the mindsets of the Roosevelt cousins and Miles Copeland, America's Great Game is ingenious and unprecedented.”

Plain Dealer, Cleveland
“[A] lively, informative study of early Cold War American diplomacy and spy plots in the Middle East....Even more fascinating than the foreign cloak-and-dagger exploits is Wilford's examination of clandestine CIA attempts to weaken domestic U.S. support for the new state of Israel.... As Kim [Roosevelt] or Archie [Roosevelt] might have said, Wilford's book is a ripping good yarn. Moreover, it sounds salutary warnings about Americans' inflated sense of our ability to influence local developments and the dangers of unintended consequences.”

Pittsburgh Post-Gazette
“[A]n important book.... The preponderant value of the book is that it goes some way to explaining not only the Middle East, but how America arrived at its current relationship with the key countries of the region.”

American Jewish World
“If you are afraid that this book is too specialized for you, fear not. Because it is very well written, well organized and brings its characters to life, you can dip into it selectively or allow the whole saga to unfold.”

The New Republic
“America's Great Game is about the moment, from the late 1940s to the late 1950s, when the United States was the region's upstart, rather than its hegemon. Wilford's book...underscores the high hopes but ultimate flaws and fallacies in the Americans' meddling....Wilford contrasts the hopes expressed by the spies and young Arab nationalists in Cairo and Damascus for a new kind of power relationship with the reality of American ambition, deceit, and blunder.”

Pittsburgh Tribune Review
“Many who fret today over America's Middle East role and relations likely don't realize that when its involvement there first deepened, after World War II, U.S. policy was quite different from what it is now — pro-Arab, anti-Zionist. That policy, says Hugh Wilford in his new book America's Great Game, was carried out largely by three men who worked for the CIA in its early years.... Wilford shows that as different as U.S. Middle East policy now is, it still has to deal with ramifications of his CIA Arabists' adventurism.”

Charleston Post and Courier
“There is much to be learned from America's Great Game about what the CIA has done undercover that has affected American geopolitics to this day. The book also gives a greater understanding of how we got to where we are at present in the Middle East. There are some excellent lessons to be learned about the consequences of bad policy and covert action.”

World Affairs
“[An] engaging book.... ‘The Arabist defeats of the Eisenhower era established the basic pattern of US relations with the Middle East in the years that followed,' Wilford writes in America's Great Game. Readers of this entertaining and stimulating book will find it difficult to disagree.”

The Daily Beast
“America's Great Game is professor Hugh Wilford's gripping and witty account of American efforts to shape policy in the Middle East, in an attempt to avoid the mistakes that the British had made during their ‘Great Game' to control Central Asia. The picture he paints, though, is one more of failed good intentions than of imperialistic villainy.”

Commentary
“With exquisite detail drawn from personal papers, autobiographies, and secret correspondence, Hugh Wilford's America's Great Game follows many of [the CIA's first Arabists] as they became entranced by the Middle East.... The gatekeepers to academe warn graduate students that diplomatic history is at best already written and at worst irrelevant. With his fine achievement, Wilford proves them wrong.”

Winner of the 2014 Washington Institute Book Prize
“This is also American social history at its finest, tracing how a fascination with the East captivated America's midcentury elites (including two Roosevelts, Kim and Archie, who mixed espionage with fantasy). Fine writing and research in untapped archives come together in this invaluable account of America's left-footed entry into the Middle East.”

Wall Street Journal
“[Wilford] makes deft use of declassified government documents.... In addition to analytical rigor, Mr. Wilford has an eye for a good story.... Mr. Wilford is a careful historian, with no Middle Eastern ax to grind. The main goal of America's Great Game is to shed light on the role of the CIA in the Middle East. It succeeds magnificently.”

New York Times Book Review
“What is most remarkable in this tale…is how quickly our three Arabists were willing to jump to the other side of the street, to go from identifying and encouraging progressive Arab leaders to trying to neutralize them, to go from deriding the client regimes left behind by the European powers to cozying up to them.... It's to Wilford's credit that he highlights the inconsistencies — and often, outright falsehoods — of his main sources.”

Hugh Wilford is a professor of history at California State University, Long Beach, and author of four books, including The Mighty Wurlitzer: How the CIA Played America. He lives in Long Beach, California.
Loading...
or
Not Currently Available for Direct Purchase