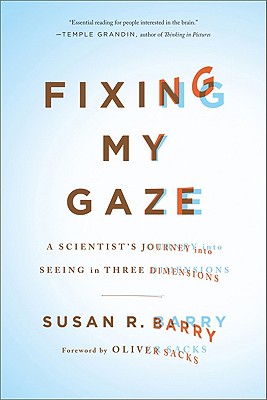 A Scientist's Journey Into Seeing in Three Dimensions

A revelatory account of the brain's capacity for change

When neuroscientist Susan Barry was fifty years old, she experienced the sense of immersion in a three dimensional world for the first time. Skyscrapers on street corners appeared to loom out toward her like the bows of giant ships. Tree branches projected upward and outward, enclosing and commanding palpable volumes of space. Leaves created intricate mosaics in 3D.

Barry had been cross-eyed and stereoblind since early infancy. After half a century of perceiving her surroundings as flat and compressed, on that day she saw the city of Manhattan in stereo depth for first time in her life. As a neuroscientist, she understood just how extraordinary this transformation was, not only for herself but for the scientific understanding of the human brain. Scientists have long believed that the brain is malleable only during a "critical period" in early childhood. According to this theory, Barry's brain had organized itself when she was a baby to avoid double vision - and there was no way to rewire it as an adult. But Barry found an optometrist who prescribed a little-known program of vision therapy; after intensive training, Barry was ultimately able to accomplish what other scientists and even she herself had once considered impossible. Dubbed "Stereo Sue" by renowned neurologist Oliver Sacks, Susan Barry tells her own remarkable journey and celebrates the joyous pleasure of our senses.

Praise For Fixing My Gaze: A Scientist's Journey Into Seeing in Three Dimensions…

"Essential reading for people interested in the brain."—Temple Grandin

"[A] powerful account.... [Barry's] journey to attain the type of vision that most take for granted is inspirational and instructive."
—Virginian-Pilot

"[Barry's] buoyant journey into stereovision is an eye-popping ride."
—Discover

"[A] fascinating account.... In addition to recounting her personal triumph, Barry clearly explains the visual and clinical science needed to understand the significance of this achievement.... [T]his engaging book will leave both readers knowledgeable in the field, as well as those just looking to understand something about the visual process, pondering what else there is left to see."
—The Journal of Clinical Investigation

"Enticing.... [Barry] combine[s] a vivid and poetic account of her recovery with a detailed description of her treatment and the underlying science."
—Nature Neuroscience

"Fixing My Gaze provides a fascinating, informative, and beautifully written account of [Barry's] acquisition of stereopsis after vision therapy at the age of 48 years.... Barry's insights about her own vision provide wonderful insights into what it means to not have stereopsis, and the profound, life-changing effect of acquiring it."
—Optometry and Vision Science

"Readers of this book will be enriched by the experiences that Sue Barry recounts on her marvelous journey.... Part memoir and part science, Fixing My Gaze is a fitting tribute to the determination of a patient and her optometrist in challenging conventional wisdom and dogma."—Journal of Behavioral Optometry

"One axis of [Barry's] book is a graceful and grateful appreciation of a newly acquired ability to see the volume of space between objects and to see each object as occupying its own space - revelations that allowed her to live among and in the things of this world and gave her first movements of snow falling, trees branching, and a faucet arcing out of the sink.... The book's main contribution, however, is exposing the wrong-headed dogma that acuity and binocular vision can be restored only during a critical developmental period."
—New England Journal of Medicine

"[A] testament both to human physiology and spirit that permits someone to live with - and then change - a uniquely altered view of the world.... This book opens up the possibility that people can change their physical limitations, and that it is never too late to try."
—BookPage

"[An] exemplary and informative testimony to the probably lifelong plasticity of the brain."
—Booklist

"[Barry] tells a poignant story of her gradual discovery of the shapes in flowers in a vase, snowflakes falling, even the folds in coats hanging on a peg.... Recommended for all readers who cheer stories with a triumph over seemingly insuperable odds."
—Publishers Weekly

Susan R. Barry is a professor of neurobiology in the Department of Biological Sciences at Mount Holyoke College. She speaks regularly to scientists, eye doctors, and educators on the topic of neuronal plasticity. She has been featured on NPR and in a New Yorker article by renowned neurologist Oliver Sacks entitled "Stereo Sue." She and her husband have two grown children and live in South Hadley, Massachusetts.
Loading...
or
Not Currently Available for Direct Purchase