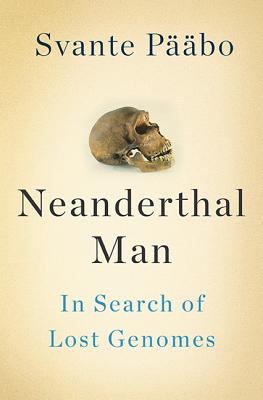 In Search of Lost Genomes

What can we learn from the genomes of our closest evolutionary relatives?
"Neanderthal Man" tells the story of geneticist Svante Paabo's mission to answer this question, and recounts his ultimately successful efforts to genetically define what makes us different from our Neanderthal cousins. Beginning with the study of DNA in Egyptian mummies in the early 1980s and culminating in the sequencing of the Neanderthal genome in 2010, Neanderthal Man describes the events, intrigues, failures, and triumphs of these scientifically rich years through the lens of the pioneer and inventor of the field of ancient DNA.
We learn that Neanderthal genes offer a unique window into the lives of our hominin relatives and may hold the key to unlocking the mystery of why humans survived while Neanderthals went extinct. Drawing on genetic and fossil clues, Paabo explores what is known about the origin of modern humans and their relationship to the Neanderthals and describes the fierce debate surrounding the nature of the two species interactions. His findings have not only redrawn our family tree, but recast the fundamentals of human historythe biological beginnings of fully modern Homo sapiens, the direct ancestors of all people alive today.
A riveting story about a visionary researcher and the nature of scientific inquiry, "Neanderthal Man" offers rich insight into the fundamental question of who we are.

Svante Paabo is the founder of the field of ancient DNA. The director of the department of genetics at the Max Planck Institute for Evolutionary Anthropology in Leipzig, Paabo has been featured in the New York Times, Newsweek, National Geographic, and The Economist, as well as on NPR, PBS, and BBC. In 2009 Time named him one of the 100 Most Influential People in the World. Paabo lives in Leipzig, Germany.
Loading...
or
Not Currently Available for Direct Purchase