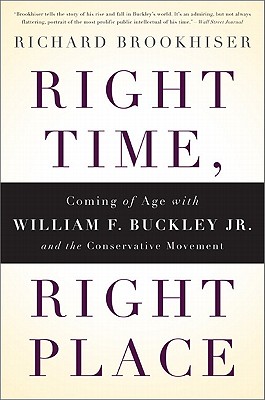 Coming of Age with William F. Buckley Jr. and the Conservative Movement

Richard Brookhiser wrote his first cover story for National Review at age fourteen, and became the magazine's youngest senior editor at twenty-three. William F. Buckley Jr. was Brookhiser's mentor, hero, and admirer; within a year of Brookhiser's arrival at the magazine, Buckley tapped him as his successor as editor-in-chief. But without warning, the relation ship soured -- one day, Brookhiser returned to his desk to find a letter from Buckley unceremoniously informing him "you will no longer be my successor."

Brookhiser remained friends and colleagues with Buckley despite the breach, and in Right Time, Right Place he tells the story of that friendship with affection and clarity. At the same time, he provides a delightful account of the intellectual and political ferment of the conservative resurgence that Buckley nurtured and led.

Witty and poignant, Right Time, Right Place tells the story of a young man and a political movement coming of age -- and of the man who inspired them both.

Mona Charen
“Absorbing reading.... [A] gripping tale.... Brookhiser tells the story of his relationship with WFB...straightforwardly and honestly.... [A] fascinating look back (how does he remember so many details?) at a 30-year friendship and collaboration (part of which I witnessed first hand). Rick's personal history with WFB parallels the rise of the conservative movement. And it will not surprise fans of Brookhiser's biographies that this memoir is a brilliant and beautifully written history of the past several decades.”

Publishers Weekly
“[Brookhiser] deftly sets his personal and professional biography in a sharply observed historical and intellectual context, while sharing his deep affection for – and occasional resentment of – Buckley with compelling candor.”

Kirkus Review (starred review)
“[W]onderfully conversational, occasionally confessional, frequently witty.... More than anything, though, Brookhiser reflects on his maturation as a thinker, writer and a man who for too long measured his worth against the glittering Buckley, his spiritual father, inspiration, boss and friend. Old enough now to appreciate the misunderstandings on both sides, chastened by a bout with cancer and distinguished in his own right as a historian, Brookhiser's eyes-wide-open appraisal of his mentor is deeply affectionate. Right book, right author.”


Michael Medved, talk radio host and author of The 10 Big Lies About America
“A stirring and enormously readable account that provides a valuable reminder of the ability of a single individual to bend the course of history and alter, forever, a nation's thinking.”

Rich Lowry, editor of National Review
“Richard Brookhiser has written a wonderful memoir that is a personal history of National Review and of contemporary conservativism—unabashedly honest, deeply wise, and analytically acute. Brookhiser is the prose equivalent of a fine jeweler. With his lapidary style and dazzling metaphors and erudition, he's always a marvel to read.”

Lou Cannon, co-author of Reagan's Disciple
“Right Time, Right Place is a galloping good read—an honest, fast-paced, revealing memoir by one of the conservative movement's best writers. William F. Buckley emerges as a real human being, warts and all, and not just the Conservative Saint. Of course, Buckley is that, too, but he's more rounded in this book than in any other I have read.”

Terry Teachout, drama critic of The Wall Street Journal
“I thought I knew Bill Buckley. Now I know better—a lot better. But Right Time, Right Place is more than just a poignant, startlingly frank memoir of a remarkable man. It is also a portrait of a pivotal moment in American political and intellectual life, seen through the eyes of a gifted writer who saw it all happen and knew what he was seeing. Anyone who wants to understand how and why the conservative movement changed America will have to reckon with this book.”

Wall Street Journal
“In Right Time, Right Place, Mr. Brookhiser tells the story of his rise and fall in Buckley's world. It's an admiring, but not always flattering, portrait of the most prolific public intellectual of his time.”

Washington Times
“[T]his is a beautifully written book, rich in character and anecdote, with good political reporting and a dispassionate account of Mr. Brookhiser's bout with cancer, which he handled bravely and with grace. Above all, though, it's about a young man's education and his teacher.”

Richard Brookhiser is a senior editor of National Review and the author of eleven books, including James Madison, Alexander Hamilton, American, and Founding Father: Rediscovering George Washington. He lives in New York City.
or support indie stores by buying on