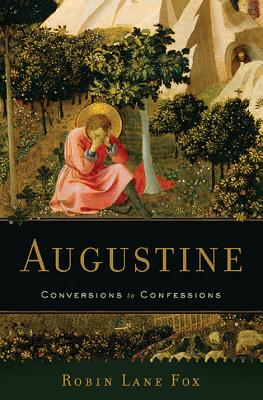 "This narrative of the first half of Augustine's life conjures the intellectual and social milieu of the late Roman Empire with a Proustian relish for detail." -- New York Times

In Augustine, celebrated historian Robin Lane Fox follows Augustine of Hippo on his journey to the writing of his Confessions. Unbaptized, Augustine indulged in a life of lust before finally confessing and converting. Lane Fox recounts Augustine's sexual sins, his time in an outlawed heretical sect, and his gradual return to spirituality. Magisterial and beautifully written, Augustine is the authoritative portrait of this colossal figure at his most thoughtful, vulnerable, and profound.

Praise For Augustine: Conversions to Confessions…

Winner of the 2016 Wolfson History Prize

"One of the most distinguished and prolific living scholars of Late Antiquity ... Lane Fox ... reveals with remarkable enthusiasm and sympathy the spiritual and intellectual drama of his remarkable subject."—Financial Times

"Robin Lane Fox has now done [Peter] Brown [author of Augustine of Hippo] one better.... Fox is such a good writer that interest never flags, and you always feel that 'you are there.'"—Mark Lilla, New York Times

"This book interweaves political, military and personal history to describe in detail the first four decades of Augustine's life... Fox explores everything that is known about the great teacher's life and social world, including his various lovers and intellectual partners."—Economist

"Mr. Fox traces with clarity the development of Augustine's thought, but also of his character.... [He] succeeds in offering us a figure whose inner and outer struggles, whose strengths and weaknesses, do somehow reach across the centuries and touch something profoundly human."—Wall Street Journal

"It is a profound understatement to observe that it was appropriate for Robin Lane Fox, at last, to tackle a biography of Augustine."—Financial Times

"Augustine: Conversions to Confessions is a compelling read.... A page-turner that might last the whole winter long, come spring you'll be all the more enlightened."—Chicago Tribune

"Fox has written an
attentive, rich, and compelling book about Augustine which will reward scholars
and edify non-specialists. It will also entertain both."—Catholic World Report

Robin Lane Fox is an emeritus fellow at New College, Oxford. He's the author of many books on ancient and classical history, including Augustine, Alexander the Great, and The Classical World, which was named one of the Top Ten Nonfiction Books of 2006 by the Washington Post Book World. He lives in Oxford, England.
Loading...
or
Not Currently Available for Direct Purchase